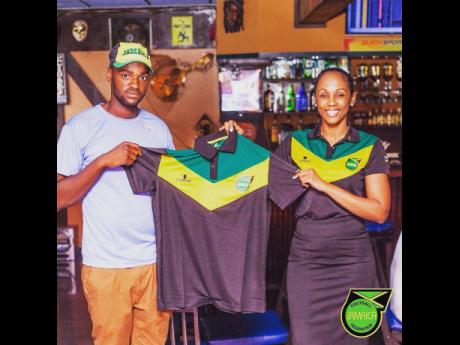 Contributed
Sophia Harris-Lau (right), head of marketing and business development at the Jamaica Football Federation (JFF), presented Tremayne Brown with a JFF Reggae Boyz branded apparel on Wednesday at a tribute, organised by Howard McIntosh, director of The Pub, located at West Kings House Close. Brown valiantly risked his life to save that of 12 year-old Renaldo Reynolds from drowning last Friday.

The finals of the 2017 Western Sports-sponsored, Kingston and St Andrew Business House Football League will be contested today at Winchester Park, St George's College. The games were postponed last week because of bad weather.

In the curtain-raiser at 2 p.m., Appliance Traders Limited (ATL) will face Peak Bottling in the Division Two final. At 4 p.m. in the Division One final, Petrojam will meet Scotiabank.

In the Division One feature, Petrojam will be playing in their eighth straight final and are seeking their seventh title. They are coached by Lenworth 'Teacher ' Hyde while the coach of Scotiabank is Marcel 'Fuzzy" Gayle.

KSAFA Under-13 and Under-15 leagues continue today

The MILO/KSAFA Under-13 and Under-15 competitions continue today at several venues. All Under-13 games are scheduled to begin at 3 p.m. while the Under-15 matches begin at 4:30 p.m.

The Turtle River Park in Ocho Rios will come alive today for the staging of the grand finals of the Nutramix Double Six Domino Championship. Fifteen teams from eight regional rounds will battle for cash and other prizes, courtesy of Nutramix.

St James. The competition seeks to create relationships and give back to farmers while encouraging potential farmers to get involved in the agricultural industry. It also aims to celebrate the spirit of the domino game, a popular past-time for Jamaicans far and wide.