Livermore to know fate on October 30 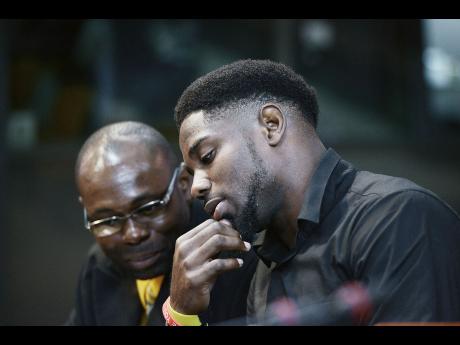 National sprinter Jason Livermore and his team contested that he was not seeking an unfair advantage when he tested positive for metabolites of clomiphene and mesterolone as his hearing before the Independent Anti-Doping Disciplinary Panel wrapped up at the Jamaica Conference Centre in downtown Kingston yesterday.

The athlete will hear the decision of Chairman Kent Gammon, Dr Marjorie Vassell, and Heron Dale on October 30.

Yesterday, the panel heard evidence from Livermore's medical doctor, Rex Xavier Dowe, who said that the athlete was being treated for a condition which is of a "very sensitive" nature.

While admitting that he was aware that Livermore is a professional athlete, Dowe said that he is not a sport medicine specialist. He noted that he knew of banned substances, but also said that doctors "use a lot of banned substances in treatment of everyday conditions" and added that he would still have prescribed the same medication for Livermore, given the nature of his ailment.

"At the level it was, there was no other treatment. It would have given no performance enhancement. I didn't do anything differently because I'm treating the condition," Dowe said.

NO KNOWLEDGE OF EXEMPTION

Last week, Livermore admitted that he was clueless as to the existence of a therapeutic-use exemption (TUE) form which athletes who are taking certain substances would require to not be deemed in violation of anti-doping rules if they test positive for a prohibited substance.

Yesterday, Dowe also said that he had never heard of the TUE.

"I wished I knew about it because I would have reminded him (Livermore) about it," Dowe told the panel.

The Jamaica Anti-Doping Commission (JADCO) was again represented by attorney-at-law Judith Clarke and its executive director, Carey Brown, who was fired last week by the commission's board.

In response to Livermore's statements that he had no clue about certain anti-doping matters, Brown presented late evidence that his body had sent several notices via email in October 2016 alerting Livermore to a JADCO anti-doping workshop for senior athletes in November 2016.

Livermore, however, said that his email account had been hacked and he had not received those emails.

Livermore's manager, Lorenzo Sandford, who represented him during the two-day trial, which began on September 11, told The Gleaner that he believed the athlete's case had been adequately presented.

"We have brought forward all the evidence there is to bring forward on this case to show that the athlete was genuinely being treated by a medical doctor and that the substance, the dosage, as you heard the doctor testify, is not something to give any unfair advantage to boost performance, so we are confident," Sandford said.

"JADCO had said we had a case to answer, and we believe we have answered that case," he added.

Although Livermore did present evidence of a medical condition, which was confirmed by Dowe, there have been cases in the past where athletes have received sanctions after testing positive for substances present in medication prescribed by a doctor. Most notably was the case of current 100m World champion Justin Gatlin, who received a two-year ban in 2001 after testing positive for a substance found in his treatment for attention deficit disorder.