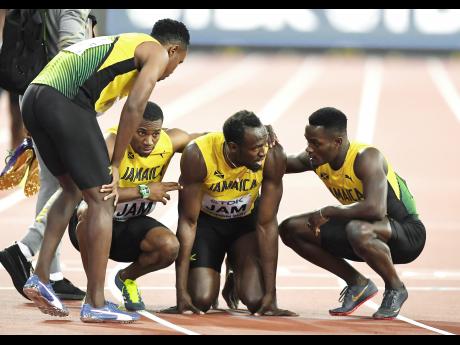 Ricardo Makyn
Usain Bolt (second right) being consoled by his team members (from left) Julian Forte, Yohan Blake and Omar McLeod after he pulled up in the final of the men's 4x100m at the recent IAAF World Championships in London. 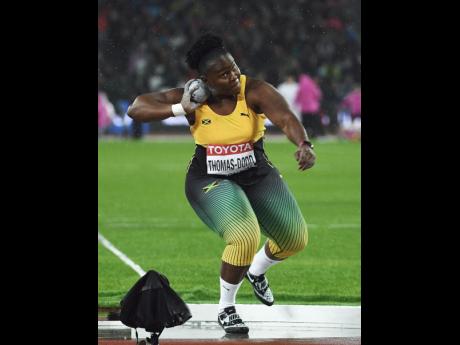 The incomparable Usain Bolt is gone, but the empress of speed Shelly-Ann Fraser Pryce, is on her way back to partner Olympic 100 and 200-metre champion Elaine Thompson at the top of world sprinting. Beyond that, the best guess is that a newer group of Jamaicans will bear the black-green-and-gold standard on the big stage.

As we now should all know, success isn't guaranteed. Nasty weather in London confounded our mostly local-based sprint crew at the World Championships this year. Those who did their training in the 30-degree-Celsius warmth of Jamaica found themselves shivering in the rain and the 13-degree freeze of London.

A look at typical Tokyo weather is instructive. The July and August temperatures are tolerable at about 25 degrees Celsius. There is rain every other day. Most often, Tokyo gets 20 days of rain in July and about 17 in August.

The cold and rain did us in at the Worlds in a city that had been kind to Jamaican athletes at the 1948 and 2012 Olympics. When the weather turned against us in London this year, we weren't ready. Sadly, Bolt and Anneisha McLaughlin-Whilby pulled while at speed, and almost all others ran with restraint.

By contrast, on one of the worst days of the Championships, Norway's Karsten Warholm won the 400-metre hurdles over a star-studded field in the slowest winning time in the history of the meet. His cold-weather comfort made him feel right at home.

The Japanese rainy season, which runs through the July 24 to August 9 Olympic period in 2020, could present some challenges. Thankfully, there is enough time for our track and field brains trust to research the circumstances the team will face in Tokyo. Some individual coaches, clubs and athletes will have some ideas already, but perhaps this is a job for the G.C. Foster College for Physical Education and Sport. Alternatively, there are now faculties of sport at both the University of the West Indies and at the University of Technology.

One of them could take on the task of researching the approach to preparing the locally based athletes to excel in Tokyo's weather. Specific advice on warm-up time and technique, hydration and clothing could constitute the difference between winning four medals and twice or three times as much.

It's no accident that Jamaica's only gold medal in London came from 110 metres hurdler Omar McLeod, who lives abroad and often runs in cold weather. Danniel Thomas-Dodd, who trains in chilly Ohio, said she was right at home as she made history by being the first Jamaican woman to reach at a World shot put final. For all I know, 400-metre hurdles bronze medallist Ristananna Tracey had some cold-weather tolerance built in from her high school days in Frankfield, home of Edwin Allen Comprehensive.

When the recri-minations end, it will be time to face the future. Jamaica still has a robust high-school system, competent coaches, and a post-secondary club and college network to go with the traditional option of the US track scholarship. Research and more advance planning can only help.