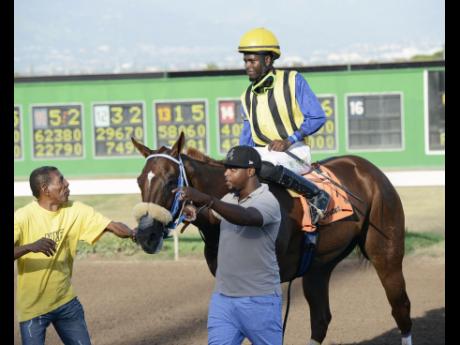 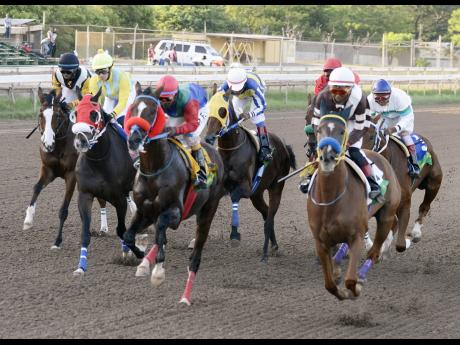 Ian Allen
The horses are seen shortly after leaving the gates in last Saturday's Kenneth Mattis Memorial Trophy race at Caymanas Park. The eventual winner, SUPERLUMINAL, is third from left. 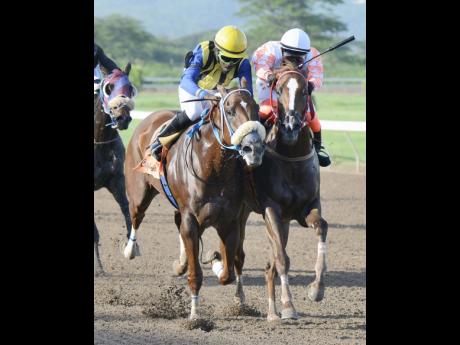 Sunrise-6 players have a virtual minefield to negotiate in tomorrow's opening race at Caymanas Park.

There is sparse form and also very few exercise reports for the horses in the $250,000-claiming event. Trainer Steven Todd will saddle three of the seven runners and he appears set to earn the lion's share of the purse with MONEY MOVE.

This seven-year-old mare has been campaigning in the $180,000-claiming group since April and has been fairly consistent during the last six months. She has speed and will surely love the distance of 1000 metres round.

Race two for $180,000 claimers who have not earned $150,000 since May 22 is also a very knotty 1600 metres event. OH MY GRAND PA, SISTA MARGARETT and ALDEBARAN all have good recent form, and I am selecting the latter to come home ahead of the field.

ALDEBARAN performed very well with 56kg in an 800 metres race on August 12. The eight-year-old gelding comes back well trained with a 4kg ease in the handicaps. Crack lightweight jockey Wesley Henry has been asked to ride and he is expected to push ALDEBARAN in front early and make it a post to post affair.

WILLODEEN was quietly fancied to get off the mark last Saturday, but lost his jockey early in the 1400-metre race for maidens. MIGHTY CROWN, who was soundly beaten at exercise by WILLODEEN on September 9 (1:36.1 to 1:30.2 for 1400m), ran very well in that race and although they will travel over 1000 metres straight, the Carlton Watson-owned WILLODEEN should win going away in the last 1000 metres.

CRUISING MOTION and SIEMPRE BUENO will decide the outcome of race four, a 1000 metres straight event for $450,000 claimers. The latter ran very well over the distance in overnight company on September 9. He, however, comes back nine pounds heavier and should be beaten by CRUISING MOTION.

When the two met at level weights on May 6 over tomorrow's distance, CRUISING MOTION won by three-quarters of a length. He should maintain his dominance over a course where he has always done well.

There is no stopping Wayne DaCosta's GREEK GODDESS in the fifth. This Casual Trick-Raging Fury two-year-old filly has been burning up the exercise track and will not be beaten.

The sixth and final event over 1000m straight for three-year-old maidens looks tailored for BAD GAL HILLARY. She has been knocking loudly at the door since mid-August and after two solid second places in the past month should get off the mark at a fairly good price.