Get up, get active and keep moving - Powell’s new line of personal-care products to encourage healthier lifestyle 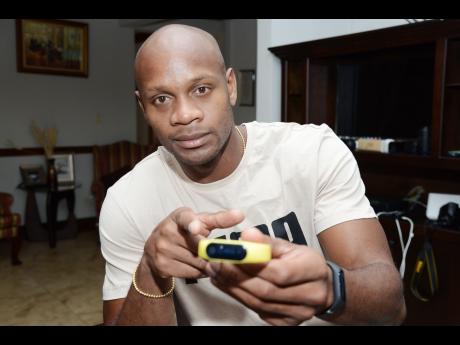 Rudolph Brown
Asafa Powell display one of his fitness bands. 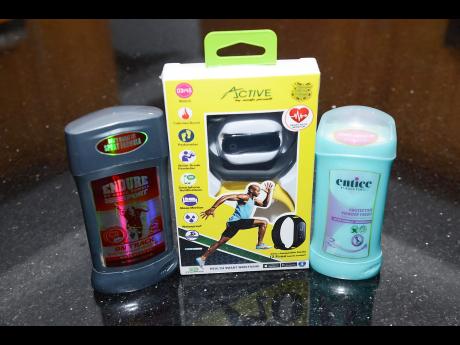 Rudolph Brown
Active by Asafa Powell fitness watch and tracker alongside a range of deodorants - Endure (left), which is scented for males, and Entice for females. 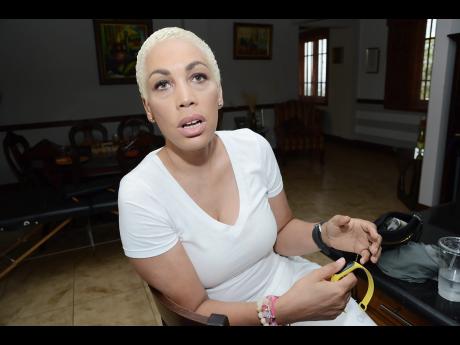 Jamaican sprinting star Asafa Powell is hoping that his new line of fitness and personal-care products will not only help to encourage a healthier lifestyle, but will also play an active role in the fight against breast cancer while providing valuable medical equipment for local high schools

Powell, a widely regarded and vastly experienced international athletics standout, has taken his brand and influence to the fitness market with the release of his Active by Asafa Powell fitness watch and tracker, which will be released alongside a range of deodorants ­ Endure, which is scented for males, and Entice, which will serve the female audience.

The former 100 metres world record holder, who was personally touched by the disease, will also be contributing to breast cancer treatment through part proceeds from sales of the Entice deodorant product’s sports formula, with a similar arrangement around the Endure line, expected to provide defibrillators to high schools.

“It’s a way to push people to work out, get healthy, and track their fitness,” Powell said of his fitness watch and accompanying mobile app.

“Our app allows you to track each other’s fitness. If your friend did not get up all morning and work out, you can message him and push them to do so. It’s a great way to keep you on your toes.

“As athletes, we definitely have to give back, but where breast cancer is concerned, I have close friends who have had a rough time, and that definitely motivated me a lot to go in that direction with the female product,” Powell explained. “With the male product, we have been searching for high schools. We are targeting younger kids, and we wanted to give back to high schools. My foundation as well is about giving back to the upcoming generation, and giving back to high schools is always a part of the plan.”

The 34-year-old is also looking to give back through providing high-quality, affordable products packed with all the industry-leading features, with his Active fitness band boasting conveniences such as a full waterproof guarantee; a security element that alerts you if your phone moved, for example, when you place it somewhere in the gym; stat-sharing capabilities; and the ability to dish out all the necessary numbers of one’s steps, calories, heart rate and so on.

“I am an athlete, and I am into fitness and people have been asking me for years for tips on how to stay fit, what diet they should work with, and so forth, so this idea has been on my mind for a long time,” he shared.

The idea was helped to reality by his friend and manager Tara Playfair-Scott, who herself, has a full appreciation of the value of promoting a healthy lifestyle after she was diagnosed with breast cancer.

“As most people know, I had breast cancer and realised the cost is staggering for someone to pay to try to save your own life, and most of our country is not in a position to afford health care like that,” noted Playfair-Scott. “We saw so many athletes last year collapse, and had there been something on site, who knows, maybe they would have been here with us today. So if we have a defibrillator at each high school, then that’s a life or two that we can possibly save.”

From concept to completion, Playfair-Scott has been instrumental in the process, even if both underlined that the sprinter played a leading role in all decisions around the products.

“For him (Powell), these are obviously products that fit right within his wheelhouse. Even in his off season, he’s not one to lay around, so he is always working out, and the Active band is something that he connects with. We know we have fitbits, and so forth, but why not? Why not something that is born out of Jamaica and out of a Jamaican athlete?” asked Playfair-Scott, who described the Active band as a better alternative to other options on the market. (Active by Asafa Powell costs $8,500 plus tax).

“We wanted things that could encourage our country to get up and get active and keep it moving because a healthy nation is a prosperous nation,” she added.