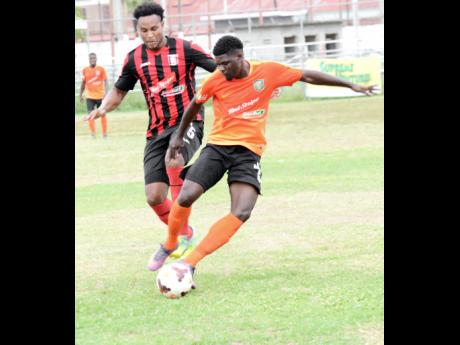 Any game featuring Tivoli Gardens and Arnett Gardens is always a delight, and today should be no different as the two powerhouses take centre stage in one of five Red Stripe Premier League matches on the schedule.

As hosts and defending champions, Arnett Gardens should wear the favourites tag when both teams meet at 6 p.m. this evening at the Anthony Spaulding Sports Complex. Tivoli Gardens and their coach, Omar Edwards, will have other ideas.

"We lost our first game, which wasn't our plan. We travelled to Reno to leave with at least a point, but that did not happen. Despite that, we had some positives coming out of that game. We kept a lot of possession, defended stoutly up until about the 85th minute, and created quite a few chances, so this should help us going into today's game," Edwards said ahead of the contest.

"Today is a new day, a new game, so we start on equal footing. Games between us are always physical. The communities have high expectations of both teams and neither will want to disappoint. We have enough quality to leave Arnett with a positive result," added Edwards.

Arnett Gardens' Jerome Waite has had enough encounters with Tivoli Gardens to know not to take them for granted.

"Despite Tivoli losing their first game, whenever they are up against Arnett Gardens, it is one of the biggest rivalries in the local Premier League, and we expect the usual tough game from them. They always come hard for us," Waite said.

To get the better of the opposition, Waite, whose team defeated debutantes Sandals South Coast 3-1 in their opening game, believes that they will have to play an improved first half.

"The first game was not played the way I expected. We did not have a strong first half. It was in the second half that we got it together. It is still a work in progress, but we have to get it together from the start for this game," Waite said.

For Arnett Gardens to start the way they want to, top midfielder Vishinul Harris will have to have a more consistent game, creating openings for Fabian Reid, who is expected to lead the line. Marvin Morgan will also have to be at his best.

Jermaine Johnson, as he was last year, was a key factor in Tivoli's successes last season, and he will have to be focused today. Support for Johnson should come from Tevin Shaw, Nicholas Smith, and Shavar Campbell.

At Stadium East, the returning Cavalier will hope to get the better of Harbour View in the battle of the east, while Humble Lion will be gunning for their second successive win and their first at home for the season.

Sandals South Coast will be hoping to have similar luck to parishioners Reno FC, who got the better of Tivoli Gardens last week at the Frome Complex, while Waterhouse will be aiming to make home advantage count against Reno.