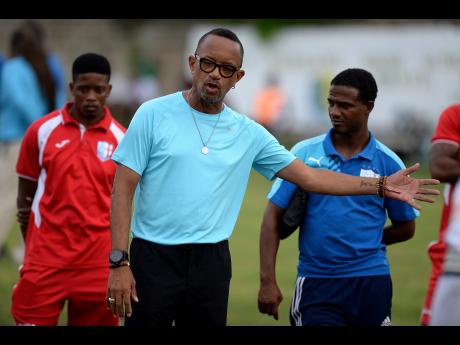 Neville 'Bertis' Bell, the highly-regarded head football coach at St George's College, says he has no desire to coach the national senior team, noting that he is comfortable at his alma mater and is focused on helping youngsters in their development.

To this end, the coach said that he would be willing to assist with the Jamaica Football Federation's (JFF) youth development efforts.

The charismatic Bell has earned many admirers for his work with St George's and many believe he can have a similar impact on the Reggae Boyz. He is, however, more interested in helping the national academy.

"I appreciate it (that people believe I can help the national team). It's a huge compliment, but I am comfortable where I am. I have told the JFF that I would help in any way. Maybe I can help at the JFF academy, I would get involved in that but I really don't have that desire or time to coach the national team. It takes a lot of time and I would have to give up everything else I'm doing and I am not sure I want to do that now," said Bell.

Despite his impressive resume and the respect that he has earned from Jamaican football fans, the five-time Manning Cup winning coach insisted that his best work is with young players.

"I am happy here (St. G. C). I don't think I have any great ability, but if I have any it would be to motivate kids. Sometimes when I hear 'big coach', I feel good but I am certainly not the big coach, I just want to motivate these youngsters," he continued.

Meanwhile, Bell's love for young players goes far beyond coaching and is not restricted to his own team. It is not uncommon to see him rush to the assistance of an injured opponent or hug an opposing player, who just had a horrific moment and give him words of comfort and encouragement.

Against Tarrant on Tuesday, Bell showed his selflessness, as he left his bench to help nurse Tarrant's injured goalkeeper, Jonathan Currie, who could not continue, and with the help of another person assisted the player (by shoulder) to the bench. He then had comforting words for substitute goalkeeper, Demario Knight, who slipped and spilled the ball in his own goal with his only touch of the game in time added on.

"I have seen Cristiano Ronaldo play badly, I have seen Messi missing a penalty, so these youngsters will play badly and they will miss easy goals.