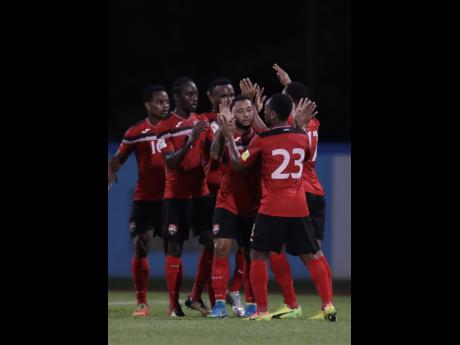 AP
Trinidad and Tobago's Shahdon Winchester celebrates with his teammates after scoring against the United States during a FIFA World Cup qualifying match in Couva, Trinidad on Tuesday night.

Playing in their final match of CONCACAF qualifying for the 2018 World Cup, T&T pulled off a 2-1 victory to end an otherwise disappointing campaign on a high while dumping the Americans from the Russia showpiece.

"I would like everyone to look at [Tuesday's] match and understand that this is the beginning of our new era," Lawrence said.

Lawrence said then that it was important to focus on rebuilding the national programme and preparing a squad to qualify for the 2022 World Cup.

The former national defender said the 3-0 loss to Panama early last month, which signalled their elimination, had been a key turning point in the side's development.

"Something we've been trying to work on is belief, the belief that as players we are as good as anyone," Lawrence said.

"I've been trying to educate the boys once we lost to Panama, the idea is to start to think about going forward. The Panama defeat wasn't a failure; it was the beginning of what we're going to start to do next. And that started [on Tuesday]."

Following their elimination, Lawrence moved to include some inexperienced players with the view of turning the focus to development, and Tuesday's victory came against that backdrop.

With the CONCACAF qualifying tournament over, however, T&T face the challenge of getting regular football, but Lawrence said he was hoping to have this addressed.

"What I would like to happen is we have to play an international friendly on every FIFA date," he noted.

"That is part of the programme because I would like to have more contact time with the players. I've told the boys that when they leave and come back, they must not drop their standard."