Take Sacrifice in Race One 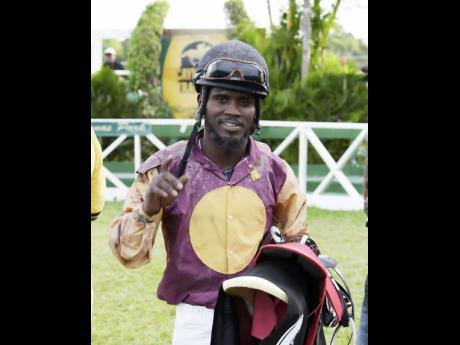 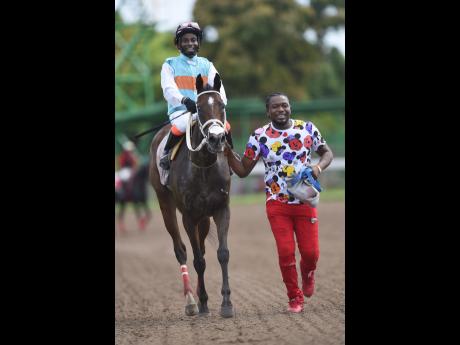 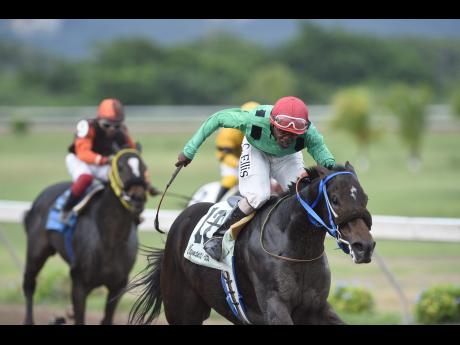 Gladstone Taylor
TOOT THE BLUES (Conrod Ellis, up) powering to victory in the seventh race, over 1000 metres, at Caymanas Park last Saturday. 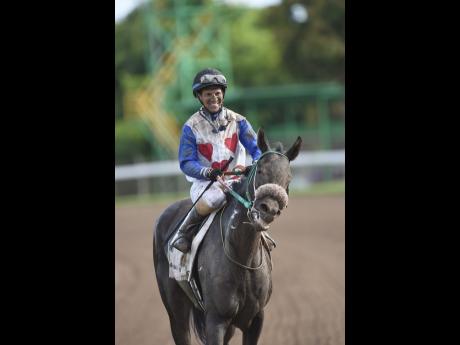 Jockey Robert Halledeen has been having some very dark days at Caymanas Park.

He has not won a race since June 17 when he captured the third race aboard the Peter McMaster-trained Princess Emanuelle. Halledeen is still in the top ten (ninth), but with only 21 winners from 147 mounts.

All that should change tomorrow as he has quite a few 'live' rides. In fact, Halledeen is strongly tipped to open the Sunrise-6 aboard SACRIFICE on the Cash Pot Only One For Me Trophy day at Caymanas Park.

Owned and trained by Edward Walker, SACRIFICE showed good speed in sloppy conditions to lead until the final furlong of a 1200 metres event on September 30. The two-year-olds will go 100 metres shorter tomorrow and with the more accomplished Halledeen replacing Jemar Jackson, the Freedom For Jante - Kennisha colt, should go all the way.

In Race Two, $250,000 claimers will travel 1600 metres and MONEYNEVERSLEEP is back among company which she slammed by three lengths over 1700 metres on August 26.

She returns seven pounds heavier but remains very fit. The nine-year-old mare went up to $300,000 claiming and was not disgraced when finishing sixth by 17 lengths (also over 1700m) clocking 1:51.1 on September 9. This time was close to the 1:50.2 she did in August. Look for her to stalk the field early before powering through in the final 400 metres.

MAJOR FORCE is the selection in Race Three. Connections had selected Halledeen on the overnight, but have now opted for the hot claiming apprentice Dane Dawkins to pilot the four-year-old colt in the 1820 metres race. He showed vast improvement to beat non-winners of two by six lengths before returning to lose by just three lengths to non-winners of three. The blinkers which were fitted for the last race have been taken off, and MAJOR FORCE should show his appreciation by running another big race.

Wayne DaCosta's SUPERTRONICS has returned to his best and should not be opposed among $450,000 claimers in Race Four. The five-year-old gelding has been training very well since placing second to Siempre Bueno over 1000 metres straight on September 23. At his best SUPERTRONICS is far better than this claiming group and will score an easy win with leading rider Omar Walker aboard.

PROUD OF NUCLEAR is the firm choice for Race Five. The three-year-old colt ran on for second behind stablemate and former classic contender Uncle Vinnie on September 30. With nothing of that calibre in this race PROUD OF NUCLEAR will have things his own way.

Take RUNALLDAY to cool the expected hot favourite, LOOSE CANNON, in Race Six over 1000 metres straight. Both had fast times at exercise October 7 with the latter coming out the better (46.0x58.4) over the straight. The handicaps are, however, in RUNALLDAY's favour and Dick Cardenas should hold her behind the early speed before exploding in the final 100 metres.