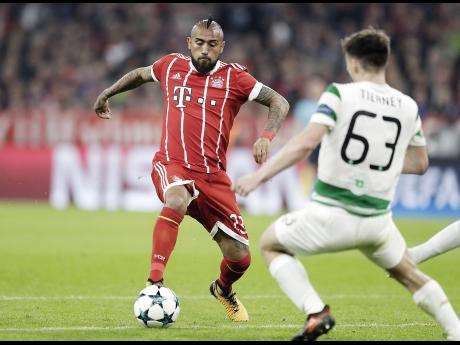 AP
Bayern's Arturo Vidal, left, and Celtic's Kieran Tierney challenge for the ball during their Group B Champions League match at the Allianz Arena in Munich, Germany, yesterday.

MUNICH (AP) -- Bayern Munich returned to the Champions League yesterday with a familiar face in charge and comfortably defeated Celtic 3-0.

Jupp Heynckes, who retired after guiding Bayern to the Champions League, Bundesliga and German Cup treble in 2013, has the German powerhouse running smoothly again after taking over from Carlo Ancelotti. The Italian was fired after the side's 3-0 defeat at Paris Saint-Germain.

Paris Saint-Germain won 4-0 at Anderlecht in the other Group B game on Wednesday and lead with nine points, three ahead of second-place Bayern. Celtic have three points and Anderlecht are last after three defeats.

Bayern, which routed Freiburg 5-0 in Heynckes' first game back at the weekend in the Bundesliga, again produced an assured performance despite a lively start from Celtic. The visiting fans celebrated their side's early corner like it was a goal.

"We should have scored more goals," Heynckes said, adding that "we left too much space at the back and the opponent had a couple of chances. That's something we need to work on."