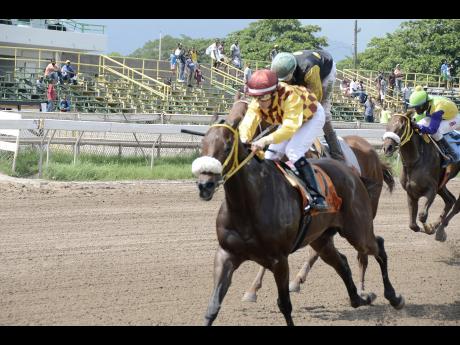 ACKEE PIE, half-sister to the very fast 2017 classic contender Money Magnet, should not be opposed in tomorrow's opening race of the Sunrise-6.

The event, to be contested over 1000 metres straight, has attracted seven two-year-olds and Richard Azan holds a strong hand with his Adore The Gold - Jazzy Jet filly. She has been literally burning up the exercise track and last Saturday went 46.2x1.00.4 over tomorrow's distance and looks a very smart one.

Steven Todd's STANISLAUS should also be an easy winner in the second event, which is confined to three-year-olds. By Traditional - Absolute Justice, STANISLAUS has failed to really confirm his early promise. The gelding has, however, campaigned against far better opposition in the past and will not be denied in this 1000 metres round race.

REJECTED SLEW HARD TO BEAT IN THE THIRD

Trainer Welsh Soutar's REJECTED SLEW was up with the leaders for most of last Saturday's 1200 metres race for non-winners of two, and now back against similar company, she will be hard to beat in the third. Visiting Panamanian rider Dick Cardenas, the hottest jockey now on show at the track, should settle her quickly in front from the number-one draw and pull away in the final stages.

A mostly out-of-form 11-horse field will face the starter in the fourth, an 1100 metres race for $180,000 claimers. SONADOR EXPRESS looks the likely winner. The five-year-old mare was seen running on strongly in the 800 metres race won by Fastandflashy last Saturday. Her final time was 48.3 and this suggests that she is back to her best.

KALAMATA will give jockey Robert Halledeen a rare winner in Race Five over 1820 metres. The British-bred filly loves a distance of ground, has come down at least two classes to face this field, and it should be an afternoon stroll for the four-year-old.

Stable companions KANALOA and HELLO LADY will have the sixth between them. The latter beat KANALOA at exercise on October 14 and is given the nod in the 1100 metres race for non-winners of three.