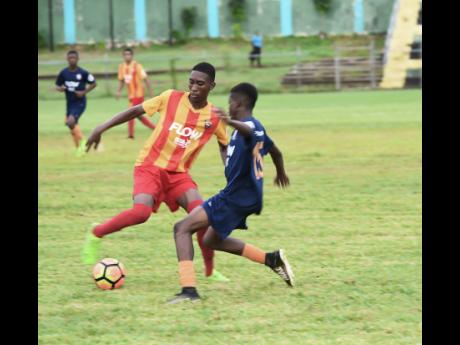 Coach Dr Dean Weatherly employed a more attacking formation yesterday as according to him goal difference could be important on Saturday.

"It was a good performance when you consider that we are coming off a very disappointing loss on Saturday. This was a win that we needed, so we'll just have to wait and see if come Saturday we can win the zone," said Weatherly.

Cornwall College went ahead as early as the sixth minute when Trevaughn Walker scored. They didn't take long to extend their lead as Aiden Jokomba (11th), Garnet Hudson (15th), 14-year-old Ahmal Nugent (27th) were all on target as Cornwall went to the break leading 4-0.

The winners took their feet off the accelerator in the second half but substitute Nigel Phillips was on target in the 76th minute before Jokomba completed the drubbing in injury time.

Rusea's High followed up the victory over Cornwall by clipping Lennon High 1-0 at St Elizabeth Tech courtesy of a goal by Leonardo Fogarty midway the first half. The former champions lead the group with six points from Cornwall and Lennon, who are both on three.

Coach Vassell Reynolds said the win was a good one.

"We entered the game with a different strategy from the one we used against Cornwall last Saturday. We want to remain grounded and focused come Saturday against St. Mary Tech as we need at least a point from that game so we are approaching it very seriously," Reynolds said.