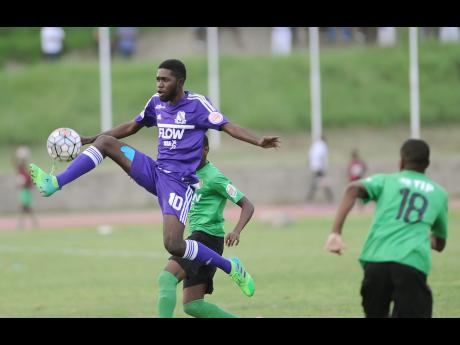 Ricardo Makyn
Rashawn McKinson (left) of Kingston College keeps his eyes on the ball while coming under pressure from Calabar’s Demeiro Adams in their ISSA-FLOW Manning Cup encounter at the Stadium East Field last Saturday.

If Kingston College does in fact win the Manning Cup this season to end a 31-year drought, thanks may well be due to Calabar High School.

In that round, robin quarter-final Group H tie at the Stadium East Field, most fans had expected a dominant KC performance. After all, the Purples had won all but one of their previous matches while scoring 67 goals. By contrast, Calabar had lost twice in the first round. An early KC goal suggested that the script was being followed to the purple letter. However, the shocks began with a missed KC penalty that would have made the score 2-0 and continued with a Calabar equaliser before the end of the first half.

Then the test of character really began. Even experienced football analysts predicted the course of the second half incorrectly. The Lijyasu Simms-coached Calabar team ran tirelessly to hurry KC's skilful ball handlers. While the KC goalie was never seriously troubled after the Calabar leveller, his outfield teammates had to contend with a high press and determined tackling and coverage.

The gilt-edged good fortune rescued Calabar in the second half when KC twice rattled the cross bar.

If KC do in fact win the Manning Cup, this test of character will serve them in good stead. Their players should learn from last Saturday's encounters that better teams will not surrender easily. For Calabar, this season could be a turning point. Now gifted with a lovely pitch as part of the redevelopment of its playfield, it's certain that Simms will now be able to teach good football fundamentals to his charges. The best guess is that Calabar marry that to the fitness their team has shown this season to become dangerous opponents.

Since that match, the Ludlow Bernard-coached Kingston College have moved a step closer to the semi-finals with a 3-0 win over Bridgeport. Given that Calabar lost to defending champions Jamaica College, a draw will suffice for KC to edge Calabar and second place in this quarter final round-robin group. It's hard to tell, but JC might even ease the accelerator when they face KC in the feature match of the Manning Cup at the Stadium East on Saturday.

With Calabar needing to win big against Bridgeport and requiring JC to beat KC to advance, the battle is on.

Miguel Coley's Jamaica College have become the ultimate tournament team. Modest early on, JC didn't even win their first-round zone this year. Yet, slowly and steadily, the outfit led by Tyreke Magee is emerging as the favourites for the Manning Cup. Coley's method of getting his teams to peak at the right time is worth serious study. Under his care, JC have become a juggernaut.

It's little wonder. As part of the Reggae Boyz coaching set-up from several years, Coley has no doubt learnt a lot and grafted that knowledge onto his own footballing philosophy. Four straight Manning Cup/Olivier Shield doubles don't lie.

The next step is for graduates of Coley's JC teams to step forward to a far more important duty, that of piloting Jamaica upward in world football.

- Hubert Lawrence has been making notes at trackside since 1980.