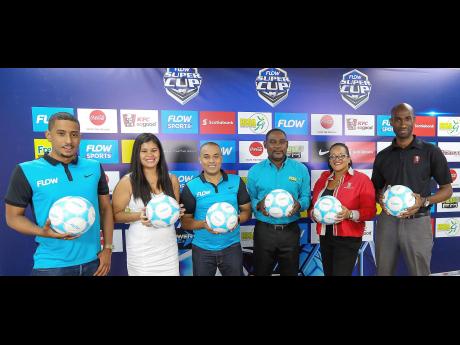 The selection of an All-Star team will be one of the highlights of the three-week ISSA/FLOW Super Cup tournament which kicks off on November 10.

Details of the 2017 competition were revealed during an online press conference yesterday.

This session will be held with the view of developing their skills while giving the players a taste of a professional training environment.

This year's competition will see the top eight schoolboy football teams (down from last year's 16) competing over three weekends.

The top four teams from the ISSA/FLOW Walker Cup corporate area competition will face off against the top four rural area-based ISSA/FLOW Ben-Francis semi-finalists for a total prize money of $1.8 million. The winners of the ISSA/FLOW Super Cup will take home $1 million cash for school development.

To ensure the highest quality execution, the organisers have also secured the best football venues - the Montego Bay Sports Complex and Sabina Park.

Carlo Redwood, vice-president of marketing at FLOW, said his organisation is committed to helping with the development of the sport.

"Our continued aim is to help boost the marketability of the local football product," said Redwood.

"As we all know, it takes cash to care, and development requires funding. Increased investment must be a key priority both at the school and community level, as well as through the national competitions organised by ISSA," Redwood said.

He added: "The ISSA/FLOW Super Cup is intended to benchmark what excellence looks like and so we express our thanks to the members of corporate Jamaica, ISSA and other stakeholders who have embraced the vision and are working in the background to move the sport forward."

Dr Walton Small, the president of ISSA, commended the FLOW team and the many other sponsors for the significant investment and the planned improvements to the 2017 season, which will guarantee an engaging and exciting competition.

"FLOW's investment extends far beyond cash as their guidance in how to structure and market the product is immeasurable," said Small.

Meanwhile, FLOW'S sponsorship and events manager, Stephen Miller, said every effort is being made to ensure smooth access to tickets and venues.

Tickets will go on sale on November 8, at FLOW Carlton store on Half-Way Tree Road in Kingston and the FLOW Store Fairview in Montego Bay.

Tickets for the Sabina Park are $500 for entry to both the George Headley and North Stand, while in Montego Bay, tickets are priced at 500 for bleachers and $1000 for grandstand.

The ISSA/FLOW Super Cup final will take place on November 25.