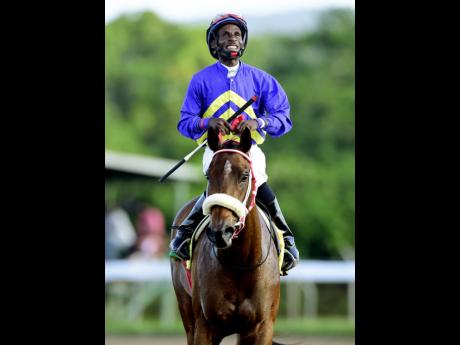 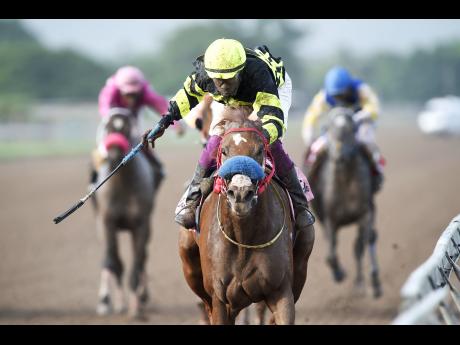 Gladstone Taylor
SHE'S PLUMMY (right) with Jerome Innis aboard, crossing the line first in last Saturday's seventh race. She was later disqualified for causing interference to BIGBROWNGREYHOPE (Aaron Chatrie) and placed fourth. The race was awarded to second past the post CONCUR.
1
2

American-bred two-year-old GO GO GIRL took on local three-year-olds on October 7 and was well beaten by Toot The Blues, Malachi, and Peeping Tom.

Now back among her age group, GO GO GIRL is expected to score a runaway victory in the opening race of the Sunrise-6. The filly clocked scorching early spilts of 22.3x45.4 over the 1,000 metres straight three weeks ago but gave up a furlong out. Anything close to those splits tomorrow will be enough to take care of the local two-year-olds, whose challenge will be led by HONEY RYDA.

The Richard Azan-trained filly finished a creditable fourth by just over six lengths to top two-year-olds Patriarch and Another Vigorous on October 14 clocking a good 1:13.2 for 1200m. The distance has been reduced to 1100 metres, and HONEY RYDA will not be able to live with the American's speed. Ameth Robles will ride the selection.

Dick Cardenas, the hottest jockey at Caymanas Park just now, can further excite his growing fan club with victory aboard AURELIA'S SUMMER in Race Two. Anthony Nunes' three-year-old filly has been running well without much luck since August. The blinkers, on for her last three races, have now been taken off and AURELIA'S SUMMER should produce the capital effort. She will sit behind the early speeders CHEERLEADER and STORM PRINCESS in the 1100 metres race and power through in the final 200 metres.

Super-6 players can bank on GREEK GODDESS in Race Three. She is still very green but a third-place finish behind Patriarch and Another Vigorous in just her second run was very encouraging. The increase in distance to 1400 metres is just what she needs, and the well-bred filly will turn the race into a procession.

Five years old and up non-winners of three horses will travel 1200 metres in Race Four and WICKED TUFF, with Shane Ellis aboard, looks the one to beat. The six-year-old gelding has placed second twice in his last two starts. In his most recent run on October 7 over 1400 metres, WICKED TUFF was two lengths clear with 200 metres to go but was caught late by HOLY LIGHT.

Top jockey Shane Ellis has now been given the ride (ahead of Ansel Dancel) and his experience should be enough to hand WICKED TUFF his third win.

Low-level claimers will face the starter for the 1,000 metres straight fifth race. TIMEFORACAT and WILLINSTON were winners on their previous starts, but ARGUMENT DONE will have too much pace for his rivals. Last time at this level, and over today's distance, he slammed the field by just over three lengths.

Ellis can complete a double in Race Six for $450,000 claimers. He will ride the Azan-trained TARANIS, who failed by just over a length to beat Zackontheattack going 1,300 metres on October 14. Before that, TARANIS had been campaigning in overnight allowance company.

Tomorrow's distance is 1,600 metres, and now that he is back to his best, TARANIS will be too strong for rivals in the closing stages.