Bilingual will be too classy for rivals in feature 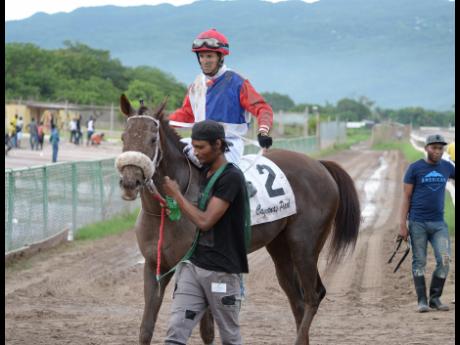 Lionel Rookwood
BILINGUAL with Dick Cardenas in the saddle.

CLASSIC-PLACED filly BILINGUAL represents the best three-year-olds of the season when she lines up against 11 rivals, her overnight allowance debut, in this afternoon's Errol 'Big Sub' Subratie Memorial at a mile.

Though she did not compete in the Jamaica Derby, it would not be far-fetched to say that BILINGUAL was one of the most consistent performers against Triple Crown winner SHE'S A MANEATER in the three-year-olds' classic campaign this season.

Despite being slowly into stride and running wide at the quarter-bend in the Thornbird Stakes, BILINGUAL went down by only two lengths to half-length winner SHE'S A MANEATER, finishing a length and a half in third behind runner-up MONEY MAGNET.

When she returned three weeks later at a mile in the Guineas, BILINGUAL showed just how much she had learnt by turning the tables on MONEY MAGNET, finishing second to SHE'S A MANEATER, beaten by four lengths in 1:39.0 - a final time that was significantly better than what the colts had recorded in the 2000 Guineas.

In the Guineas, she shouldered 57.0 kilos, 16lb heavier than the 50.0 she will carry this afternoon against three-year-olds, who were nowhere close to being classic aspirants three months ago, mixed with older horses, most of whom are average runners.

Take, for example, champion trainer Wayne DaCosta stacking the 12-horse field with three runners - speedsters DYSFUNCTIONAL and GOLD MINER, plus their run-on stablemate, IAN LINKS, who is obviously looking to capitalise on a fast-run race.

However, IAN LINKS and Richard Azan's LUCKY STROKE are giving BILINGUAL 12lb and 10lb, respectively, way too much weight for either to catch Anthony Nunes's filly in the stretch run.

Gary Subratie's United States-bred BLUE DIXIE will, as usual, have her backers. However, she has not run a decent race since March, and it will be very interesting if she suddenly turns around her form in a race named after her trainer's late father.

Beaten only two-and-a-half lengths by superspeedy LOOSE CANNON, going five and a half furlongs, in a fast 1:05.4 on September 16, not to mention coming off a near five-month lay-up, BILINGUAL will be supercozy tracking any pace before Panamanian jockey Cardenas decides to call it a day.

Simply put, BILINGUAL is too light and classy to lose at 50.0 kilos against average horses. Her winning time on last, 1:39.0, chasing cracking splits set by no-nonsense WESTERN WARRIOR, 23.2, 46.1 and 1:11.1, proved that she's every bit a miler - an ideal middle-distance horse.

Though stablemates DYSFUNCTIONAL and GOLD MINER are blessed with speed, both lack the most crucial element of a miler class. It takes a special horse to be able to chase sprinters for up to six furlongs then find a second and third gear in the stretch run.

With Cardenas ticking off his 20th winner in nine race days on Wednesday, judging the quality of his mounts this afternoon - HONEY RYDA, AURELIA'S SUMMER, NASDAQ PRINCESS, and GAGA LADY - he could very well end the day on 25 with BILINGUAL.