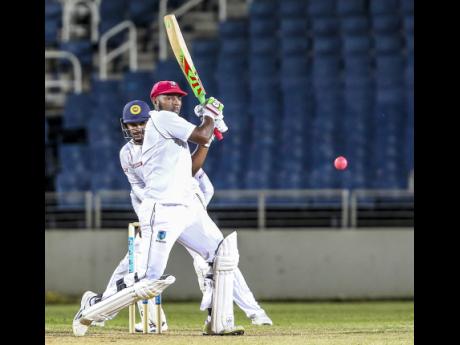 Contributed
Sunil Ambris pulls on the second day of the third Test between Windies A and Sri Lanka A last Friday at Sabina Park.

Prolific West Indies A batsman Sunil Ambris has described his century in the first innings of the just-concluded third and deciding unofficial Test against Sri Lanka A at Sabina Park as one of his better innings.

The St Vincent and the Grenadines strokemaker, who is in prime form, scored a shot-filled 101 in the West Indies' modest first-innings total of 181 to record what was his fifth first-class ton.

The century, which eventually failed to prevent West Indies A from going down to a 10-wicket defeat, and with it lost the series 2-1, saw Ambris, who made his West Indies senior team debut at the one-day international level earlier this month, slamming eight fours and two sixes off 156 balls.

It also took his tally of centuries in the series to two after scoring 106 in the first match at the Trelawny Multi-Purpose Stadium two weeks ago.

"It was one of my better first-class innings," said Ambris, who entered the fray at his usual number six in the batting order, with the West Indies struggling at 31 for four.

"Batting with the tail end made it harder than usual, as there were times when I could have gotten runs, and I had to refuse.

"I had to take my time at certain points in the innings, and at times I had to try and get fast runs, so it was kind of rough. But, all in all, it was a good innings and I am thankful for it."

The 24-year-old, whose solitary one-day innings in England saw him yield an unbeaten 38, in scoring the century, moved one step closer to the series' top runscorer accolade, which he eventually received.

Dasun Shanaka another Sri Lanka Test player, and who, too, scored a solitary ton, was third with 183 runs at average of 61.

"It's always a good feeling to be scoring hundreds," Ambris said. "I just hope that I can continue in the rest of seasons to come," he added.

The two teams are down to face each other in a three-match one-day series.

The first and second games will be day and night affairs and will be played on Wednesday and Friday at Sabina Park, with the series decider scheduled for the Trelawny Multi-Purpose Stadium on Sunday.