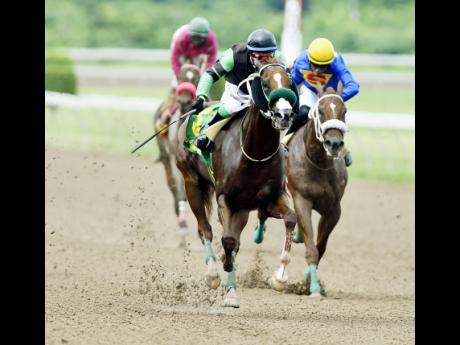 Gladstone Taylor
JESSE’S FAVOURITE (left), with Wesley Henry aboard, pulling away from rivals in the sixth race at Caymanas Park on November 4. 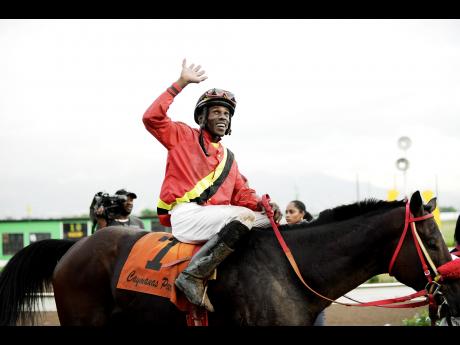 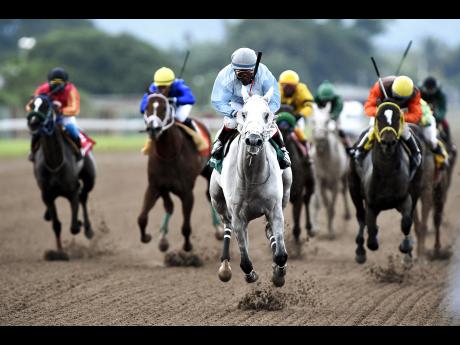 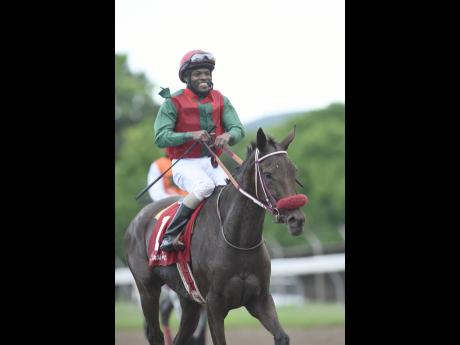 File
Dane Nelson is a happy man after winning the eighth race on Saturday, November 4 aboard MONEYNEVERSLEEP.
1
2
3
4

Dane Nelson, the jockey down to ride the highly fancied SHE'S A MANEATER in tomorrow's Burger King Superstakes at Caymanas Park, is set to give Sunrise-6 players a winning start in tomorrow's opening event over 1200 metres.

Nelson will ride PRINCESS BRIANNA in the appropriately named Burger King Breakfast Trophy which is scheduled to go off at 10:50 a.m. on the 12-race card. The three-year-old filly slammed this $180,000 claiming group by all of nine lengths on September 30 and was not disgraced when third to Sir Leyland Hall among $250,000 claimers on Heroes Day, October 16.

She returns to $180,000 claiming with 55kg, 4.5kg heavier than when she won, but against this out of form field will lead all the way and win easily.

It should also be an afternoon stroll for COMMANDER TWO in Race Two over 1200 metres. This two year-old gelding, by Forest Danger - Hurricane Michelle, has performed well among the best of his age group this season clocking 1:13.3 for the distance when finishing fifth by eight lengths to the very fast and highly regarded PATRIARCH on October 14.

The third race over 1400 metres for restricted allowance horses (non-winners of three) could prove to be very competitive as a number of the entries have good recent form. The two best equipped to pull off a win in the event are, however, URBAN PRINCIPAL and SORRENTINO'S STAR. When they met way back on April 1 over 1200 metres, the former finished five lengths ahead of his rival, who was the 8-5 favourite in the event won by Zephyr.

URBAN PRINCIPAL is training very well coming into this event and is given the nod to outlast his rivals.

Race Four should be another knotty affair with BABY P, CORALANDO and DELIGHTFUL BRENDA the top contenders. BABY P is very light and is a danger to all, while CORALANDO (56kg) ran very well with a lightweight when second to Gold Miner on October 16. DELIGHTFUL BRENDA is the selection, however, as she comes in well-handicapped and will run a big race with Paul Francis aboard.

PATRIARCH will be a runaway winner of race five, the Coca-Cola Juvenile Sprint over 1300 metres. He is a very classy two-year-old colt who will dictate the early pace before pulling away in the final stages.

The Patrick Lynch-trained CLASICAL PRINCESS has been knocking at the door for sometime and gets the ideal distance to pull off a maiden win. The three-year-old filly was up with the pace for a long way on November 1. Competent apprentice Dane Dawkins had replaced the sparingly used Delroy Beharie and the hint should be taken.