Nelson has the keys to races four and five 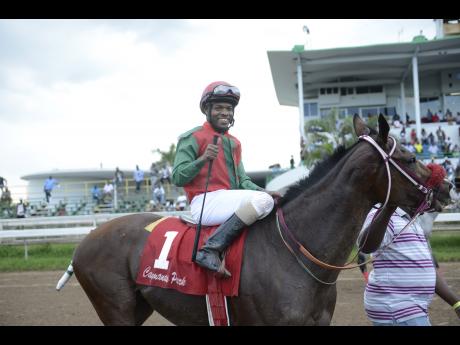 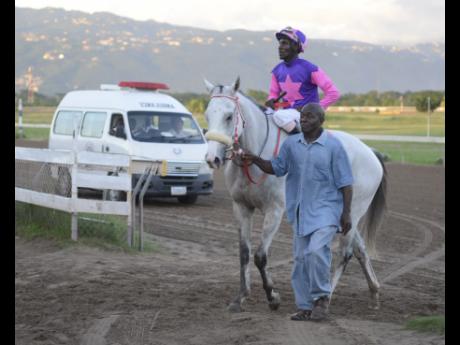 Overseas-based jockey Dane Nelson is set to have a very good day at Caymanas Park tomorrow, and Sunrise-6 players can bank on him to win races four (MONEYNEVERSLEEP) and five (GOLDEN BULLET).

Nelson could leave the Park with at least a three-timer as he also has two other good rides in the highly fancied ANOTHER VIGOROUS in the feature Pick3 Super Challenge Trophy for two-year-olds and SHINING LIGHT in the Pick3 Dash Trophy for open allowance horses.

Our attention is, however, focused on the Sunrise-6, where nine-year-old mare MONEYNEVERSLEEP drops to the lowest-claiming group after posting her last three wins over $250,000-claiming company. Nelson was aboard when she won by nine lengths on November 4 and it should be an afternoon stroll tomorrow for the Johnny Wilmot-trained mare.

Race five over 1500 metres looks competitive on paper, but a glance through the form book will show that GOLDEN BULLET has been campaigning against far better company than the $350,000 claimers he will face tomorrow. In fact, on November 1, GOLDEN BULLET clocked 1:27.0 for 1400 metres when finishing just over two lengths behind Wartime among $550,000 claimers. He should finish ahead of CUP O TEA, who has also taken a big drop to compete in tomorrow's fifth.

The opening event will be a straight battle between the Michael Marlowe-trained pair, CAT'S RIGGER and LEEKOUT. The former is expected to lead and be in front for most of the way, but should not be able to hold off the late rush of his stable companion in the 1820 metres race.

LEEKOUT is the better stayer and showed that he is approaching his best form when he closed fast to be fourth by four lengths to Union Four in an 1100 metres race on November 15.

NUCLEAR FORCE showed improved speed when fitted with the blinkers on November 15 and should prove strongest in the final stages of the second race over 800 metres. LADY V is definitely the fastest in the line-up, but has weakened late in most of her races and will be tested all the way by the selection with experienced jockey Shane Ellis aboard.

WILLODEEN and PRINCESS KAVEL are the two who will decide the fourth race, with the former-named given the edge.

Trained by Johnny Wilmot, WILLODEEN has been showing a lot on the exercise track for well over a month now. The connections appear to have stumbled upon the correct combination of race-day equipment (hood, tongue-tie, blinkers plus Lasix) and the three-year-old son of Stormcraft is now ready to release his maiden tag in his 16th start.

The final race in the Sunrise-6 will prove to be very competitive. There is no outstanding candidate among those who have raced before, and so the winner is expected to come from one of the nine newcomers in the 14-horse field.

MRS KIM, to be ridden by Richard Mairs; DADDY'S DILEMMA with Dick Cardenas aboard; and BAND OF GOLD (Jerome Innis), are all training well and one of the three should past the post first.

The Tyrone Prince-trained MRS KIM, who breezed 1000 metres in 1:01.2 on November 21 is a half brother to My Dream, who released his maiden tag with an impressive win over the straight on August 7, and I am expecting a big run from the Nuclear Wayne-High Cube filly.