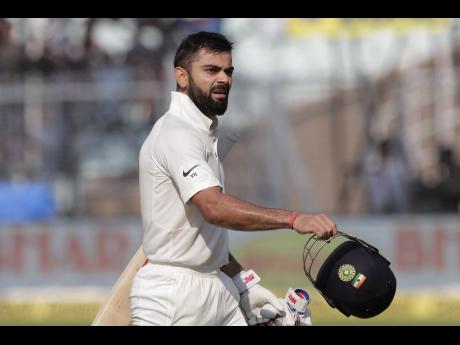 Cricket, lovely cricket, on cable is where I saw it, is a paraphrase of a memorable calypso, of yesteryear when Test cricket was the game to watch.

Recently, the advent and popularity of T20 cricket has caused many a "new" fan of the game to postulate that Test cricket is on its way out and will soon be dead. This flawed reasoning seems to be based on the fact that some Test matches end without a result even after five days of competition. Instant gratification (results) drives the younger generation, but I am firmly of the opinion that if our young sport fans get a chance to watch the best cricketers at play, thinking, planning and executing ways of defeating opponents, Test cricket will once again rival the other forms of the game in garnering fan support.

Last week, West Indians with cable television were privileged to watch Test matches between England and Australia and India and Sri Lanka. India, the top ranked Test playing country in the world, made short work of Sri Lanka in four days. The batting of the four Indian batsmen who all made centuries, Rohit Sharma: 102, Murali Vijay: 128, Cheteshwar Pujara: 143, and their captain, Virat Kohli: 213 not out, was a batting master class that should be mandatory viewing by every young and aspiring West Indian cricketer.

These men showed to anyone who watched, that the attainment of 50 runs in Test cricket, is not, and cannot be the sole reason for being selected as a batsman. Hundreds are what is expected when at the crease and things are going well!

However, West Indian batsmen are not the only ones to fail to understand this basic truism. England's new captain, Joe Root is a prime example of this "failure to go on". The first "Ashes" Test in Australia, England versus Australia, saw the Australian captain, Steve Smith crawl to the slowest century of his career, but stayed at the crease long enough to give his side a lead after the first innings of the match. Fifty runs was not enough, he needed to be there to the end, and he was there at the end of the innings. After blowing away England for 195 in their second innings, debutant opening batsman for Australia, Cameron Bancroft made 82 not out and veteran opener David Warner, 87 not out carried the home team to a 10-wicket demolition of England, who chirpily stated to anyone who would listen, before the series began, that they were in Australia for "revenge".

I think a serious review of the meaning of "revenge" is needed by the England cricketers. I do admit that the absence of all-rounder Ben Stokes, has diminished the quality of the English side, but a report of an "incident" between an Australian and English cricketers in a bar, begs the question, "does any member of the English touring party understand the effects of alcohol on the brains of humans"?

One would have believed that after the Ben Stokes debacle, thinking players and administrators would have been cautioned and advised against bar hopping and imbibing while on tour. But the tour continues, and good cricket will again be on show, for ALL the fans of the game, who long for "cricket, lovely cricket".

The touring West Indians in New Zealand seem to be settling in nicely despite being allowed to play against what is obviously substandard opponents. Scores of centuries from Shay Hope (110) and Sunil Ambris (153) and a workmanlike 88 from Craig Braithwaite gives us here "back home" hope for the series which began last night Jamaica time. We just cannot take another set of humiliating defeats, interspersed with a "stunning victory" and shouts of "we turn the corner" any more. But ... here comes news of another "bust up" in the administrative halls of West Indies cricket. Recently appointed head of the new Faculty of Sport at the University of the West Indies, and noted Sports Medicine physician, and head of the West Indies medical committee, Dr. Akshai Mansingh, announced his immediate resignation because of obstacles being placed in the path of good medical care of the members of the West Indies squad.

What came out after his bombshell announcement was that medical decisions were seemingly made by non-medical individuals at the management and board level of Cricket West Indies. There was even talk of more resignations to come, and a threat by a board member who also sat on the medical committee that if individuals of little or no knowledge and experience in treating elite cricketers are appointed, then he too would have to seriously look at his own position. Chaos and turmoil at the board level. Anyone surprised? Zimbabwe suffered for years, America has serious buyer's remorse and we in the West Indies, suffer in silence. UGH.