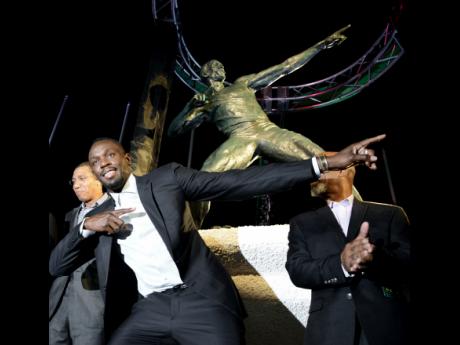 Rudolph Brown
Usain Bolt does his famous 'To The World' pose at the unveiling of his statue at the National Stadium on Sunday night.

Sprinting icon Usain Bolt says he is not overly concerned about the outcome of Nesta Carter's appeal to the Court of Arbitration for Sport (CAS) - one that will affect his own medal account - admitting that he has not really been paying attention to the situation surrounding the hearing.

The Jamaican 4x100m gold medal-winning relay unit of Bolt, Carter, Michael Frater, Asafa Powell and Dwight Thomas were disqualified from the 2008 Olympic Games in Beijing after Carter's sample was last year found to contain a prohibited substance during a reanalysis programme involving over 400 samples from athletes spanning the 2008 and 2012 Games.

This meant that Bolt and the others were required to return their medals to the International Olympic Committee, chopping the multiple-world record holder's tally to eight Olympic gold medals.

Carter's appeal was heard by CAS on November 15, with the experienced sprinter and his legal team contending, among other things, that the substance, methylhexaneamine, was not on the World Anti-Doping Agency's prohibited list in 2008 when his sample was taken, while also raising several procedural issues.

It is anticipated that CAS will present its ruling in early 2018.

However, Bolt, who told The Gleaner shortly after news broke of the retroactive positive test in June 2016, that he was "heartbroken" by the development, said on Sunday that he was not paying too much attention to the case and that he was instead focusing on his next move.

"I can't really stress. I haven't really been following it (Carter's hearing). I am just waiting on the time for them (CAS) to say what is what. I am just focusing on which direction I want my career to go. I have already done it. Yes, the medal is gone, but I already performed, and I'm now just trying to figure out what I want to do with the rest of my career, and when they decide, they decide," Bolt said.

The sprinter was speaking at the unveiling of his statue at the National Stadium's Statue Park, where the Basil Watson piece now rests alongside statues of other Jamaican athletics stalwarts Arthur Wint, Herb McKenley, Donald Quarrie, and Merlene Ottey.

"For me, this is up there. It can't be doubted that this is one of the greatest moments in my career. Having a statue in the National Stadium, where it all began, there are no words. I am just happy and really excited about this," Bolt said in reference to the recognition.

"It was all worth it. The losses, the injuries - everything I've been through - it's all worth it. It's a wonderful thing to look back and see what your career has brought you. I'm very happy and proud of myself for the work. It's just a good time and I am in a good place," he added.

With his sponsors clamouring to make the most of his free time and IAAF President Sebastian Coe hoping that the Jamaican will continue to champion the sport off the track, Bolt noted that he is yet to decide on his future.

"I haven't really gotten time off really. I've had a couple weeks here and there, but it has been a lot of sponsors' work, so I have not pinpointed what I will do, but if football doesn't work out for me. then I will definitely be heavily involved in track and field."

Bolt retired from competitive athletics with a bronze medal in the 100m at the World Championships in London this August.