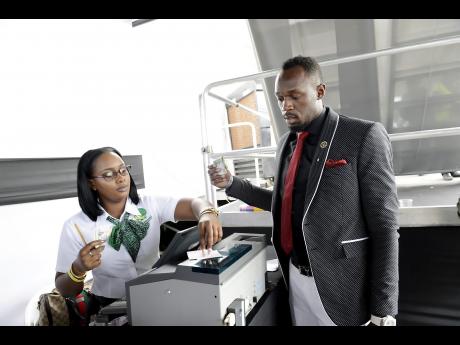 Gladstone Taylor
Sprint king Usain Bolt (right) placing a bet at Caymanas Park last Saturday ahead of the running of the Diamond Mile. 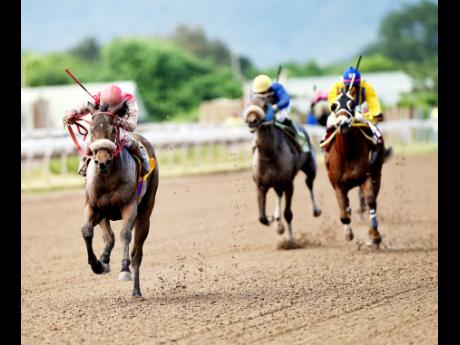 Gladstone Taylor
SHE'S A MANEATER (left), with Dane Nelson aboard, running away from rivals in the rich BG&LC/SVL Diamond Mile at Caymanas Park last weekend. 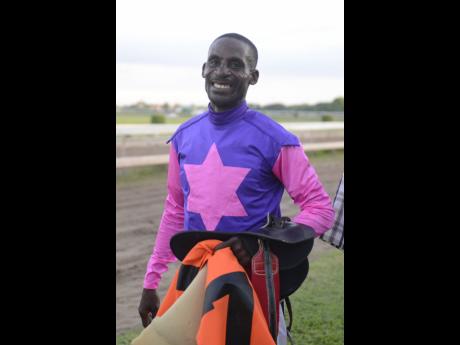 FREE MARIE can give Sunrise-6 players a winning start on tomorrow's 11-race card at Caymanas Park.

The first event, the Andrew H.B. Aguilar Memorial Cup over 1600 metres, will be a real test for two-year-olds who are being stretched out this far for the first time this season. Owned and bred by Lorenzo Robinson but trained by Lincoln Lungs, FREE MARIE showed good ability when treated with Lasix for the first time on November 25, passing the post in 1:14.1 behind a winning time of 1:13.3.

Prior to that, the Freedom For Jante - Rhea Marie filly, finished close up to subsequent winners Marquesas and My Beirut clocking 1:22.1 for 1300 metres. Her only danger is ROYAL AVIATOR who, in his only start, was 12 lengths behind Marquesas but clocked a creditable 1:28.2.

In race two, Wayne DaCosta's three-year-old maiden, UNCLE WAL, is given another chance after flopping as the even money favourite over 1300 metres last Saturday. The trainer has given a huge hint by replacing apprentice Jerome Innis with the top-rated Dane Nelson. He has also removed the figure eight and fitted the three-year-old colt with blinkers so UNCLE WAL will be much sharper tomorrow.

Non-winners of two three-year-olds will travel 1200 metres in the third and Anthony Nunes' BRUCE WAYNE is all set to take top spot. By Nuclear Wayne - Xpress Card, BRUCE WAYNE closed extremely fast over 1000 metres when he last raced on November 15 and the extra 200 metres tomorrow will be ideal. KD FLYER will be his main danger.

NO MISTAKE FOR MARY'S GOLD

MARY'S GOLD is a banker in race four over 1200 metres. With Nelson aboard, she failed by just three-quarters of a length to peg back VICTORY RUN and NUCLEAR FORCE on November 15 in a race for maiden four-year-olds. The latter returned to clock a fast 47.0 to win an 800-metre race on November 25 so MARY'S GOLD, with the confident Nelson aboard, should make no mistake tomorrow.

Wayne DaCosta's BRANDY has been given an early Christmas present in race five for two-year-olds. She was no match for the top rated pair of Patriarch and Commander Two on November 25 but should destroy this group of second-raters with just 50kg on her back and the crack lightweight Oneil Mullings to guide her. In that November 25 race over 1400 metres BRANDY was third in 1:27.1 and advertised her current well being with a 1:01.0 clocking for 1000 metres on Monday.

Close the Sunrise-6 with the fast ROMAN SPY. He is well drawn on the outside (gate 12) in this 800 metres race in which the horses will be piloted by exercise riders.