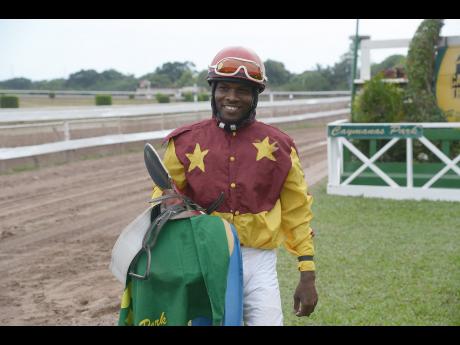 Sunrise-6 players should have few problems with the four of the first five races on tomorrow's pre-Christmas Caymanas Park card.

CHRISANLI, DIFERENTGENERATION, RUBY ROSE and PAKMAN are all five-star bankers, and punters are advised to focus most of their attention on finding the winners for races four and six.

In Race One, CHRISANLI, a three-year-old colt by Adore The Gold-Adina, has been knocking at the door since finishing a well-beaten second in August and September 2016 to top-level campaigners SHE'S A MANEATER and MONEY MAGNET. He has been slowly getting his act together since coming back from a one-year break in September and appears ready to put away his six modest rivals in the maiden event over 1000 metres straight. In-form jockey Dane Nelson has the ride.

DIFERENTGENERATION will have too much speed for $350,000 claimers in Race Two over 1100 metres. His 1:07.4 over the distance on October 25 will be good enough to take care of this field, and Nelson should complete a quick double.

RUBY ROSE, a usual front-runner, came from well off the pace last time and was outfinished by PHOTOGENIC over 1400m. They will go a furlong longer tomorrow, and RUBY ROSE is expected to go all the way. PARTY PRINCESS and PRINCE SAMMO will also be early, but RUBY ROSE'S superior fitness should prove decisive in the end.

Race Four for four-year-old and up maidens is a knotty affair. Consistency is lacking, and horses such as DAN DAN, MARY'S GOLD, CHENBUCKCHEN and TWILIGHT PRINCESS could turn up with a big run. The last named has the handicaps in her favour and a trainer, Paul Charlton, who has been doing extremely well with three-year-old colt Cartel in recent weeks. She has the speed to get away early and is tipped to go all the way with 3kg claiming apprentice Oneil Scott aboard.

Former jockey Fitzroy Glispie's PAKMAN showed very little when sent off a 6-5 favourite in August and turned up lame on November 25. All that is now behind him, however. On Monday, he thrashed former top level top campaigner TIMEFORARMS at exercise clocking 1:15.0 for 1200m and with that sort of preparation, PAKMAN will not be beaten.

Close the Sunrise-6 with POLLY FLYER. She ran well on debut when going off the 1-4 favourite on October 14. In her next run she was outclassed, finishing fifth by 16 lengths, to Greek Goddess in a 1400 metres race. The second, third and fourth have all won since and POLLY FLYER now gets a grand chance to get off the mark.