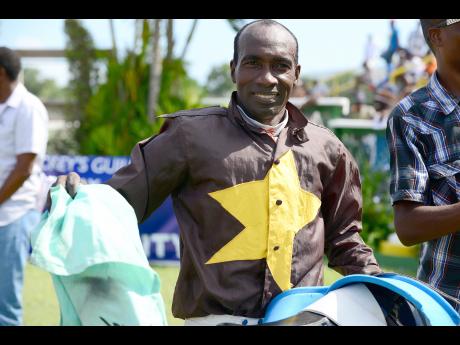 TRAINER Michael Marlowe finally stepped out of his late and famed father's shadow yesterday, landing the Supreme Ventures Limited Jamaica Two-Year-Old Stakes with 2-1 shot MARQUESAS. The bay colt raced third with BRANDY for company in the $4m event at a mile, chasing the duo of 2-5 favourite PATRIARCH and COMMANDER TWO, who went kamikaze on the lead.

Pushed by Shane Ellis, MARQUESAS shook loose of BRANDY coming off the turn and swooped down on the tiring pair a furlong and a half out before streaking to a three-length win.

"We pretty much had him to a point," said Marlowe, the son of late Valbert Marlowe, a jockey- turned-trainer, who won the Benson and Hedges Gold Cup on three occasions with KILOWATT.

"We have never squeezed this horse. What we did was to give him some of my old man's training, long gallops out of the Marlowe chute," he said, referring to the nine-furlong chute adjacent the barn from which his father trained his runners for many years.

"We knew that coming a mile he would have been tough," added Marlowe, who served as assistant to top United States trainer Nick Zito for eight years, was winning his seventh race of the season from 71 starts, three consecutive with MARQUESAS, his biggest victory since licensed locally.

MARQUESAS won the event in 1:40.2 ahead of Wayne DaCosta's 9-1 outsider BRANDY and Richard Azan's MY BEIRUT, third at odds of 28-1.

COMMANDER TWO's stamina limitations were exposed as he struggled home fourth whereas PATRIARCH's reported knee problems saw him weakening out of contention.

PATRIARCH's loss had effectively killed Anthony Nunes' shot at a last-day challenge for the trainer's title on Saturday's season-ending meet.

He reeled off three winners, including an exacta with BIGDADDYKOOL and HOUDINI'S MAGIC in the Harry Jackson Memorial, cutting the deficit to approximately $3.5m, hoping PATRIARCH would have won his sixth straight race and $2.1m in stakes.

However, DaCosta's lone winner of the afternoon, UNCLE FRANK, pushed the target back to $4m before PATRIARCH flopped.

Meanwhile, the trainer who lit up the 12-race card was Patrick Lynch, who saddled a career-best five winners 3-5 favourite DINNER BY SEVEN, outsiders DWAYNE STAR (8-1), DRONE STRIKE (13-1), PEYTON'S DELIGHT at 9-5 and RED DREAD at 5-1 in the night pan.

Ellis, who got a chance ride aboard RED DREAD, topped his peers with four winners, also partnering Lynch's debutant, DRONE STRIKE, and BIG BLACK NATION, who won the ninth event for Errol Subratie.

The season closes on Saturday, making way for the New Year's Day card on Monday.