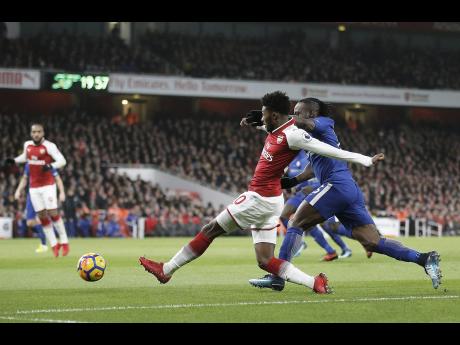 AP
Arsenal's Ainsley Maitland-Niles (left) challenges for the ball with Chelsea's Victor Moses (right) during the English Premier League match between Arsenal and Chelsea at Emirates stadium in London yesterday. The game ended 2-2.

Hector Bellerin came to Arsenal's rescue in stoppage time to clinch a 2-2 draw against Chelsea after conceding a penalty earlier in the Premier League game yesterday.

All four goals came in the final half-hour of an absorbing, open encounter at the Emirates Stadium where defending champions Chelsea only managed to reduce Manchester City's lead to 14 points.

Arsenal's title hopes faded early in the first half of the season and they are now in a tough fight just to return to the four Champions League places, as they sit six points adrift.

It would have been even worse had Bellerin not redeemed himself.

The right back's challenge on Eden Hazard had allowed the Chelsea winger to cancel out Jack Wilshere's opener in the 67th minute.

After Marcos Alonso fired Chelsea in front in the 84th, the wing back wasn't as precise back on defensive duties in the second minute of stoppage time. A headed clearance went straight to Bellerin, who levelled with a half-volley.

Chelsea were still pursuing the winner in the third minute of stoppage time and defender Davide Zappacosta struck the crossbar.

Had striker Alvaro Morata not missed so many chances this could have been a third consecutive win for Chelsea. Chelsea are becoming reliant on Alonso for goals, with the left-sided defender the team's second-highest scorer behind Morata.