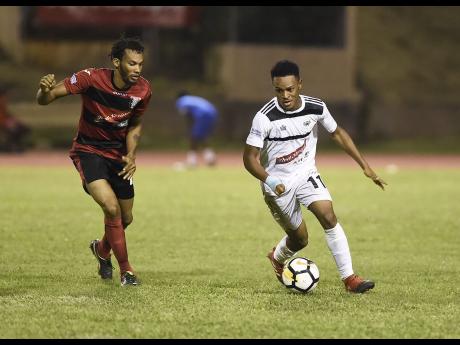 The long and arduous search for the answer to the perennial question as to why so many outstanding young Jamaican footballers, seen over so many years in the ISSA-FLOW Manning Cup and DaCosta Cup competitions, have fallen by the wayside is finally over.

After several years of pondering and debating and, indeed, after some quiet moments of reflection, it is now quite obvious that the main and overriding reason why so many outstanding Jamaican schoolboy footballers failed to fulfil their potential is because they played Manning Cup and DaCosta Cup football until they were 18 and 19 years old.

At long last, Jamaica seems to be catching up with the rest of the world in realising that at 19 years old, the career path of a professional footballer is usually already clearly defined. Eighteen or 19 is five or six years too late for amateur players to be entering the professional fold.

It is international norm that for young players to be properly harnessed and developed, they must be exposed to adult-level, professional football as early as possible. Ideally, the gamble must be taken and the decision made at 14 or 15, sometimes even earlier, but certainly not at 18, 19 and 20. Schoolboy football and its unique position on the Jamaican football landscape has been found guilty as charged of holding our best young players hostage for far too long, to the absolute detriment of these unknowing youngsters.

However, it's never too late for a shower of rain, and slowly but surely it appears that the Jamaican football fraternity is coming to the realisation that Jamaican youngsters are being left behind, and that this basic fundamental of the game cannot be ignored anymore if we want to arrest the routine and systematic wasting away of our best young talent.

Leading the charge in this regard is Red Stripe Premier League (RSPL) outfit Cavalier Soccer Club, which is positively taking the investment and development of young players to the next level. Technical director Rudolph Speid and his club have made the strategic and forward-thinking move of giving the nation's best young stars a platform to play in the nation's elite senior football league.

The average age of the Cavalier squad is 21 years and five months. There are no players over 30 in the entire squad - only three players are over 25 - with approximately 50 per cent of the squad being teenagers. The cream of the crop of local schoolboy stars, recent and current, have been gravitating towards Cavalier in droves. Top schoolboy players such as Kaheem Parris from Dinthill Technical, Nicque Daley from Clarendon College, Jeadine White from St Andrew Technical High School, Jamoi Topey, who represented Camperdown High School, are all Cavalier players, and word is that St Elizabeth Technical stand-out Clifton Woodbine is on his way to join them at Stadium East.

The seniority in the Cavalier squad, believe it or not, comes from the likes of Alex Marshall, who is still 19, Nicholas Hamilton at 21, with the veteran roles being filled by the likes of captain Chevone Marsh, at 23, and Paul Wilson at 24. The Cavalier army of youngsters is not just participating, it is creating waves in the league, sitting in fourth position and well poised for a spot in the play-offs.

In the interest of the bigger football picture, it would be great if Cavalier actually goon to win the league, but they do not have to. The die is already cast and the trend is already set. The need for the Jamaica Football Federation to mandate the RSPL clubs to trod the Cavalier path is meant to maintain the competitive parity of the league. However, the way Cavalier are going, the other clubs will probably soon smell the coffee and voluntarily tag along. The principle being applied by Speid and company is bigger than the immediate results.

The fact of the matter is that what Cavalier SC is doing is the best and most pragmatic way of developing our young talent. The journey is far from over, but it is definitely a move in the right direction. There needs now to be an international component to the equation involving a competent and well-connected agent, or agents, who can crack open the doors of the professional football market and get opportunities for these players. We should all wish Cavalier Soccer Club the best, and implore them to be strong and resolute in their journey as they continue to lead the way and clear the path towards real football progress.