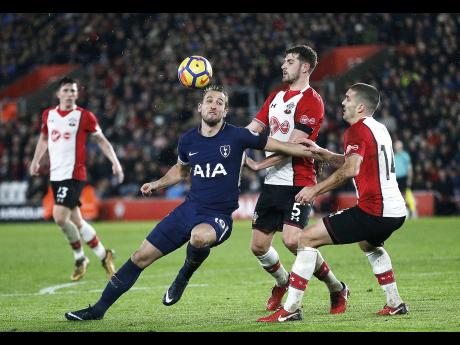 Harry Kane scored his English Premier League (EPL)-leading 21st goal of the season in a frustrating 1-1 draw for Tottenham at Southampton yesterday.

Southampton went ahead at St Mary's Stadium in the 15th minute after Tottenham defender Davinson Sanchez deflected the ball into his own net while trying to clear Ryan Bertrand's cross.

Tottenham quickly equalised with Kane heading in Ben Davies' corner in the 18th.

Spurs stayed fifth and fourth-placed Liverpool can now pull five points clear in the Champions League spots with a win at Swansea today.

Southampton remained in the relegation zone.

Sergio Aguero scored a hat-trick as runaway leader Manchester City beat Newcastle 3-1 on Saturday. City has a 12-point lead over Manchester United, which is three points in front of third-placed Chelsea.

While Tottenham will regret the dropped points, Southampton delivered a fighting draw for its under-pressure boss Mauricio Pellegrino.

The grumbling at St Mary's has grown louder in recent weeks and with Marco Silva available after being fired by Watford hours before kick-off here, the atmosphere could quickly have turned sour.

The Saints are without a win in 11 games, the longest drought of any team currently in the division, but a gutsy, aggressive display earned the players warm applause as they left the pitch.

Southampton were punishing Serge Aurier down Tottenham's right, and it was from there they took a surprise lead as Bertrand's cross was turned into his own net by the sliding Sanchez.

The hosts' advantage lasted only three minutes, however, and it could have been fewer had Eric Dier's shot not crashed against the post. Moments later, Kane ghosted past Jack Stephens to nod home Davies' corner.

Tottenham was out early for the start of the second half but failed to shake off the loose touches and misplaced passes that continually stalled its attacks.

Spurs substitute Erik Lamela saw a finish blocked by the flailing leg of Stephens before a chance fell to Saints substitute Michael Obafemi. He had only Vorm to beat from eight metres, but skewed wide.

Kane almost had the last word in stoppage time, but his angled shot fired just wide of the far post and agonisingly out of reach of the leaping Lamela.