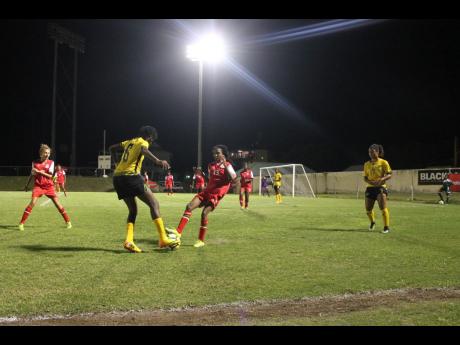 Contributed
Jamaica's footballers in action against St Kitts and Nevis in the 2018 CONCACAF Women's U20 Championship qualifiers in the Dominican Republic last November.

After being eliminated from the CONCACAF Women's Under-20 Championship, and also an opportunity to participate in the FIFA Under-20 World Cup in France in August, Jamaica's head coach, Lorne Donaldson says the Jamaica Football Federation (JFF) should do better, particularly with travelling to tournaments.

Jamaica were eliminated after going down 4-0 to Mexico last Friday and 2-1 to the United States of America (USA) two days ago in Group B, during the championship in Trinidad and Tobago.

Donaldson is adamant that there must be better preparations in order to have improved performances in tournaments.

"The difference is that Jamaica (JFF) do not understand about travelling. Until we understand that, we won't understand that that is why the Mexico game was not one of our better performance," Donaldson told The Gleaner yesterday ahead of the final group game against Nicaragua.

"They (the team) could not perform because they had to be rested from travelling. We don't know how to travel. This is not the first, second, third or fourth time. We need to do better. We weren't prepared, and I am talking about coaches and everybody. If we are looking for miracles in football, we have to be prepared for miracles," a clearly upset Donaldson boldly stated.

Jamaica will face off against Nicaragua, today, at the Ato Boldon Stadium in Couva, Trinidad and Tobago, where all the games are played. Match time is 6:30 p.m.

Both teams suffered losses against already qualified Mexico and USA. That means the winner of Jamaica's game will finish third in the group, but cannot advance to the knockout stage.

"Nicaragua is compact, they play hard, they don't have a lot of special players. They are going to be very organised, so we have to break them down. We will get a chance or two, they will get a chance or two, so we just have to take the chances when they come. The kids are going out to compete to win the game as that is all there is. What we are about is the development," Donaldson shared ahead of the game.

"The spirit is fine. We are looking at it as development. We lost to the Americans and are out but we are still going there to win the game. That is what we are there to do, development and try to win," he concluded.