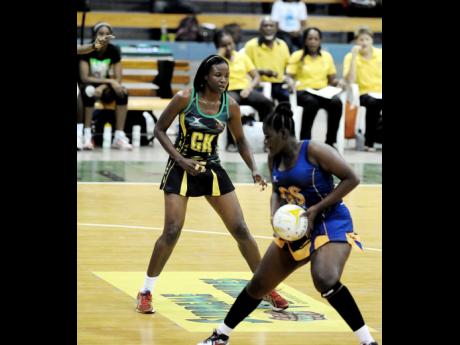 Contributed
Former national captain Nicole Aiken-Pinnock while representing the Sunshine Girls in a match against Barbados at the National Indoor Sports Complex in July 2015.

Aiken-Pinnock, who now plays professionally in the United Kingdom where she represents the Scottish Sirens in the UK Super League, told The Gleaner in an interview yesterday that she was very surprised that she has been left out of the national team.

"I am extremely disappointed, but it is nothing that I am surprised about, really," said Aiken-Pinnock. "However, I was hoping that at the end of the day, I would have been selected given my experience, given the quality of netball that I am playing right now, and [due to] the fact that I have been in training preparing myself and getting myself ready for the Commonwealth Games," Aiken-Pinnock, who was voted the top goalkeeper in the UK Super League last season, said.

"It is not a case that I am not performing, so the reality is that I am yet to hear the real reason behind me not being selected," she said.

Continuing, Aiken-Pinnock said: "However, I am not saying that I am obligated or I must make this team, but the fact is that as an athlete, when you are performing and then [you are not selected] ... then you would like to know the reason so that you can fix your errors."

But the veteran goalkeeper said that she holds no grudges about the decision and wishes the team well in both tournaments. "I think that at the end of the day, netball is bigger than me and who is in charge of the association right now, so it is about Jamaica and not me. I would really hope for the best 12 players, and if this set of ladies that were selected are the best 12 players, then I will support them," Aiken-Pinnock said.