Newcomer Golding expects to get better 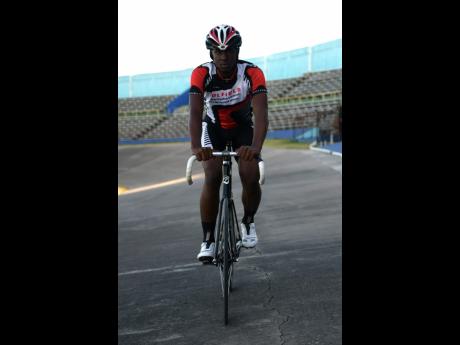 With former junior cyclist Brandon Reid recently graduating to the senior category, fans of the sport were left wondering who would step to the fore and dominate the junior class this year. However, after a convincing win at Sunday's Jamaica Cycling Federation JCF) Development Meet One at the National Stadium velodrome, Demar Golding sought to show that he is the answer.

Golding, who only started riding in August of last year, said he has been working hard but did not expect his first win this soon into his cycling career.

"This is my second race on the track, and my first time winning, and I am feeling great. It was quite a bit easy for me and I didn't expect that because I just started in August, so to get my first win so early, I am feeling good about it," he told The Gleaner.

The 16-year-old Ascot student said the win has motivated him to try and accomplish more and now he is even more focused on becoming a profession cyclist.

"I know that to get more wins, I have to train even harder and keep focused, so I am training to make progress. For this race I was organised, but everything didn't go according to plan because I was a little nervous, especially in the last race. But I came through and got the win," he said.

Golding was first in the junior event ahead of Quasey Bruce and Maliek Reid, who were second and third respectively, and he hopes to go on and dominate the junior class this year. "It's a long year and you don't know what will happen, but this is a great start and hopefully I can build on this great start and get better and better," he said.