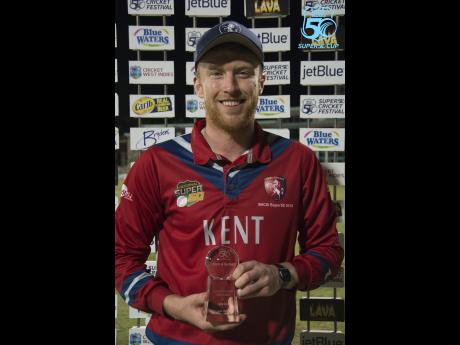 Adam Riley poses with his Man of the Match trophy after helping Kent Spitfires to a win over the Leeward Islands Hurricanes in the Super50 Cup on Sunday at Coolidge Cricket Ground.

In a match marked by several notable individual performances, including career-best spells from Orlando Peters and Adam Riley, and a series of stoppages for rain, Kent Spitfires claimed a 23-run victory under the Duckworth-Lewis-Stern Method over Leeward Islands Hurricanes to clinch the last semi-final spot in the Regional Super50 on Sunday.

The Spitfires side defied a career-best spell of 5-49 in 10 overs from Orlando Peters to post 266 for nine from their allocation of 50 overs after they chose to bat in the final match in Group B at the Coolidge Cricket Ground.

Sean Dickson hit the top score of 72, Daniel Bell-Drummond supported with 66, Zak Crawley made 43, Alex Blake got 31, and skipper Will Gidman was not out on 27 as consistent batting right down the order helped the visitors mount a competitive challenge.

In reply, Keacy Carty led the way with 69, and Montcin Hodge cracked 62 to give the Hurricanes a great launching pad of 122 for the first wicket.

But off-spinner Alex Riley, with a career-best 4-40 in his 10-over spell, removed them both in quick succession and helped to apply the brakes to the Hurricanes' chase before rain towards the end of the innings left them needing 40 from the last seven balls, which effectively ended their resistance.

The result earned Kent four points, which placed them second in the group - one behind group winners Guyana Jaguars and one ahead of last year's beaten finalists Jamaica Scorpions - to complete the line-up of teams for the Final Four.

In the semi-finals, reigning champions Barbados Pride will face the Spitfires tomorrow at this same venue, where Jaguars meet Windward Islands Volcanoes the following day to determine the two teams that advance to the Final on Saturday, also at the CCG.

LEFT NOTHING TO CHANCE

Kent's top order - led by Dickson and Bell-Drummond - made sure they left nothing to chance in the race for the last semi-final spot.

Bell-Drummond, whose 87-ball knock included six fours, shared 96 at just over four runs an over for the first wicket with fellow opener Crawley before left-arm spinner Akeal Hosein made the breakthrough in the 23rd over.

Hosein held a return catch to dismiss Crawley, but Bell-Drummond continued to push things along with Dickson before he fell to spinner Terance Warde in the 32nd over, and three overs later, Adam Rouse was stumped off Hosein for six to leave the English county side 153 for three.

Blake came to the crease and put on 72 for the fourth wicket with Dickson, whose 62-ball innings contained three fours and four sixes, before their dismissals - both to Peters - within three balls of each other in the 45th over, left the innings needing oxygen in the final stages.

Gidman provided the impetus with a four and a six from 18 balls as the Spitfires lost their last six wickets for 41 in the closing overs.

As Carty and Hodge diligently went about their business, scoring at close to five runs an over to give the Hurricanes a strong start to their chase, it looked like the hosts would canter to their target.

But Hodge fell to Riley in the 26th over, and four overs later, Carty was lbw to the same bowler to leave Hurricanes 142 for two.

But the weather, which played a major part in the match, falling in several short periods, broke the momentum of the Hurricanes batsmen and the last to affect the contest left them with a highly improbable, if not impossible task.