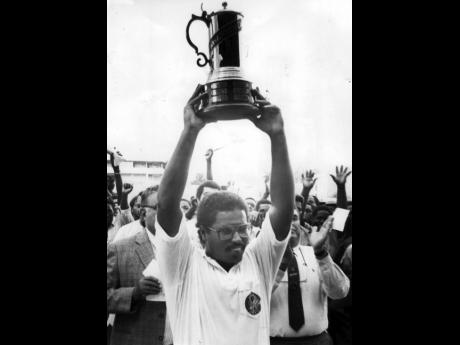 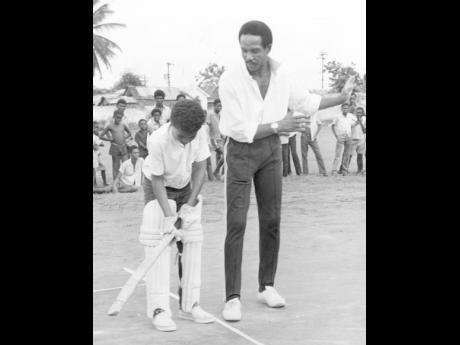 Gleaner Photographer
1973 - Former West Indies cricket captain Garfield Sobers, shows 12 year old Marlon Tucker the right way to lift his bat ready to receive a delivery. Sobers was giving a coaching session at Boy's Town with Tucker being one of two youngsters with whom Sobers was most impressed.
1
2

In 1988 and 1989, some 19 years or so after their first and only triumph under Easton McMorris in 1969, Jamaica won their second and third regional four-day titles, and they won it in style.

The captain of the team was Marlon Tucker, an off-spinner, something of a batsman, and in my humble opinion, and bar none, the best captain Jamaica has produced since 1955, the year I saw my first regional match between Jamaica and Trinidad.

More than that, Tucker and Joey Carew, remain the two best West Indian regional captains that I have ever seen, certainly in the regional four-day competition.

Ask anyone of the players, including Perry and Neita, and they will relate stories that talk of his abundant knowledge of the game of his quiet authority in the company of men like Holding, Walsh, and Dujon; of his supreme confidence; and of his ability to do the right things at precisely the right time.

I asked him why he thought so, and he said, "Because I played youth cricket with some of them and I know how to get them out."

"It is not that easy Mr B, not with the bowlers in the team. They have to bowl, and bowl a lot," he said.

"Yes," I said, "but remember, you are the captain, and you can take yourself off whenever you want, especially if you are not taking wickets. Don't leave yourself in a position where you lose the match and 30, 40, or 50 years from today you are still wondering, what if."

Tucker was the fifth bowler. He took six for 38 off 15.1 overs and five for 66 off 27 overs with Holding, Walsh, Patterson, and Haynes in the team, and Jamaica won the match by 53 runs.

There was the time when Jamaica had trouble finding a number three batsman. The whole country was talking about it. They went to Guyana, Tucker took the bull by the horn, promoted Haynes from number seven to number three, and Haynes cracked the top score of 87 in a total of 358 to power Jamaica to victory.

The next match, for whatever reason, Haynes was moved down to number six and back up to number three, exchanging places with left-hander Adams at number three and number six, Winston Benjamin and Curtly Ambrose, bowled unchanged throughout the first innings, took five wickets each, dismissed Jamaica for 96, and the Leeward Islands won the match.

And then, after Jamaica had won the Red Stripe Cup, they took on Barbados in the Gillette Cup final at Sabina Park, and after Lewis was bowled first ball of the match by Malcolm Marshall, out came Haynes at number three to play a brilliant stroke-filled top-score innings of 83 as two bizarre dropped catches cost Jamaica the match in the pulsating last few overs of the game.

Some fans may consider Tamar Lambert, the captain of Jamaica on and off for 10 years between 2004 and 2014, during which time Jamaica won the regional title many times, as good or as better than Tucker.

Despite Lambert's length of service, his three centuries, and his memorable haul of eight wickets for 42 runs, Tucker, as a captain, as a commander of his troops, was superior, and by some distance at that.

Tucker, as a captain, was so good that sometimes his moves, his decisions, seemed uncanny. Sometimes he seemed touched by the gods, and sometimes he did things that seemed instinctive, sometimes magical.

Marlon Tucker, who captained the Jamaica youth team and the West Indies youth team in 1980, and who went to Zimbabwe in 1981, along with Neita, with the West Indies 'A' team, appeared set for real greatness in his early days, especially after Garry Sobers had introduced him as a youngster with promise, during a coaching stint at Boys' Town.

Maybe it was because of his eyes why he never lived up to his promise of an all-round cricketer, but whatever it was, it was not to be.

As a captain, as the Jamaica captain, as the captain of Jamaica's winning 1988 and 1989 Red Stripe Cup teams, however, he was someone special, and one who will always be remembered for that, for how he carried himself in that period of greatness.

Tucker's knowledge of the game, his confidence, his easy, commanding authority, his presence, his uncanny decisions, and his leadership made one of a kind.