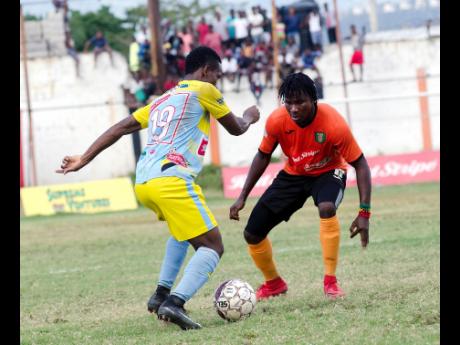 the Edward Seaga Complex in west

The wily Benbow converted past Tivoli's goalkeeper Davin Watkins early, and Waterhouse defended stoutly until the end for the win that pushed them onto 44 points in the intense battle for top-six spots.

It was a tough and physical encounter, which saw players from both teams issued yellow cards. Rodico Wellington of Tivoli was stretchered off the pitch after a serious injury.

He was replaced by Troyvone Reid in the

Waterhouse's assistant coach, Akeno Morgan, was pleased with the result.

'It was a very important victory for us, as we are fighting for a top-six finish at the completion of the preliminary stage in order to battle for the championship title. However, we will move on and prepare for the next game. It is a game by game situation," Morgan told The Gleaner immediately following the game.

"We knew that we had to play three games in six, and I'm happy we won them. It is about preparation and getting the players ready for each game," he pointed out.

Meanwhile, Tivoli received a setback, but are still in a good position to capture a top-six spot. The loss left them on 46 points in third position, behind runaway leaders Portmore United (62) and second-place Arnett Gardens, who are on 48 points.

"It was a tough loss. We managed to concede an early goal, but the team played some good football. After the goal, we settled down. Waterhouse came and played a medium-to-low press game and showed good organisation. We created some good opportunities to have at least drawn the game. We will just have to continue fighting," Tivoli's coach, Omar Edwards, said.