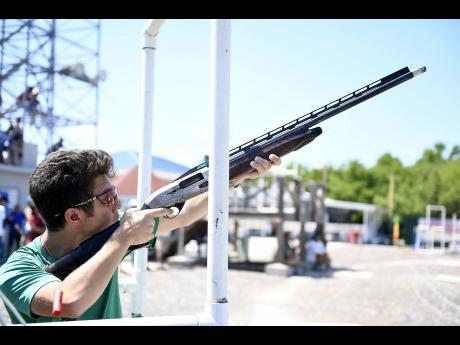 Mahfood and Josephs came into the final station of the shoot-off tied on 57 points, but it was the AISK student, who outscored his rivals to claim the overall individual prize.

Then in the shoot-off for second place, Knight got the better of Joseph to take the runner-up spot..

"It (competition) was stiff. Everyone shot three or four birds lower (on 50 target), so it was a little relieving because I was way ahead of some people, so I stressed less," Mahfood told The Gleaner.

However, he thought the deciding factor was the fact that Josephs shot after him at the final station. Nevertheless he said that he was 'glad' to win, his first title, and aspires to compete with the big boys of the sport.

"I would like to progress more and get even better where I could compete even closer with the bigger guys. If I compete with them, it would mean my life," he said.

"I think if I had gone after him, I would have shot less, because less pressure would be on him and more on me," he added.

"It's my first time (winning). (I was) sorry I couldn't get it last (year), after I shot the 50 out of 50, so I said the next time they have a shoot, I am going to win, and I kept that mentality throughout, no matter how many birds I dropped," he commented.

Meanwhile, Hillel, champions since 2010, won three out of the nine classes to retain the championship. Alexander Clarke captured the first event of the morning, the Sub Junior D class, with a shot of 24.

Ryan Lue also took the Sub Junior C class with 39, ahead of teammate Noah Azan with 31.

One of the two female categories also went to Hillel, with Christina Changpong (32) winning the Girls B Class, ahead of teammate Taylor Phillips. However, St Andrew's Savannah Miller (35) stopped Anna Issa for the Girls A crown.