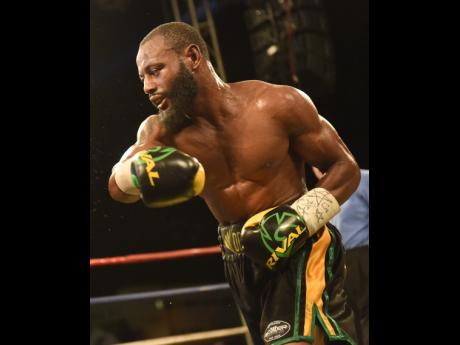 'The Axe Man', Nicholas Walters, has done well for himself and Jamaica with his exploits, proving once again that this little island of ours can produce world champions, if just given the chance. Panama was the domicile of the Axe Man, a country where he could expect proper facilities and the competition necessary to allow him to progress up the rankings in his weight class.

Here at home, Kingsley Goodison, an executive member of the Jamaica Boxing Board of Control (JBBC), has used the Stanley Couch Gym on Victoria Avenue in downtown Kingston to attract and encourage young men and women to learn and practice some of the skills that have made boxing 'the sweet science'. However, boxing fans long for the 'good old days' when ,under the leadership of the late great Lucien Chen, quality boxing was a regular occurrence. Who can forget the fact that boxing legends George Foreman and Joe Frasier clashed in a heavyweight contest right here at our National Stadium? Dinner Boxing was a regular occurrence, and Mike McCallum, 'The body Snatcher', moved from amateur class to become a professional boxer who eventually made it to the hallowed Boxing Hall of Fame.

The only way to return to those 'great days' is to understand that boxing needs a strong base (the youth) and regular quality competition for those who, by their exploits in the ring, reveal the skill and talent necessary to make it to the top in boxing. The plan to introduce boxing in schools has been promised for some time now, and with some obviously skilled children emerging from gyms springing up around the island, inter-school competition, sanctioned by some principals, may be a reality sooner than later.

Invest in the sport

What is lacking are promoters - that group of entrepreneurs, willing to invest in the sport, hoping to eventually see a substantial profit, thus being able to attract boxers of quality to the boxing card being presented to both urban and rural centres in the island.

Saturday, the 24th of February, saw a promoter taking the plunge and putting on a card in Mandeville at the Manchester High School. There are numerous reports that confirm the fact that the 'Pro-Am' card was a success. The crowd that turned up was treated to six amateur bouts featuring boxers from the USA and four professional bouts, with the main draw being the 2017 Contender champion and crowd favourite Sakima Mullings in action.

The American amateurs - vastly superior to their Jamaican counterparts regarding number of fights completed, did not have it all their own way. They won four of the six bouts to be the eventual 'winners' on the night, but once again, our local amateurs showed that with a little help, we can have boxers representing us in the Olympics.

The main attraction, Sakima 'Mr Smooth' Mullings in the ring, almost didn't happen as according to sources at the high school, the downgrading of the bout from a professional onet to an 'exhibition' had a very disappointed Sakima being convinced at the last minute to go into the ring as he was informed of the downgrade on the night of the fight.

General Secretary of the JBBC, Leroy Brown stated on local radio that when he learnt that Sakima's opponent was to be the Guyanese boxer Winston Pompey, he felt that this was a mismatch, considering that Sakima had already defeated Pompey and that since that fight Mr. Pompey had not covered himself in glory, coming to Jamaica with a ring record of 19 fights with 3 wins 3 draws, and 13 losses, 9 of which were by way of knockout.

In the sport of professional boxing where the aim is to knock out or knock down your opponent, rules have been constantly changed to protect the boxer from major injury. My research has shown that between 1980 and 2007, over 200 boxers have died due to ring or training injuries!

However, a contract was signed, and although Winston Pompey came in at 160lb and Sakima at 147lb, the sanctioning authority, the JBBC, through its secretary Leroy Brown, in an effort to protect Mr Pompey from a potential mauling by a rampant Sakima, announced that the fight was an 'exhibition'' only since the promoter (who needs every encouragement to continue to promote boxing cards) had already invested in Pompey's appearance and the crowd needed to see the great 'Mr Smooth' Sakima in action.

The "exhibition" bout was eventually stopped in the second round after a knock-down of Pompey by Sakima, but questions arose as to why the downgrade was relayed to the boxers only on fight night. It is a medical fact that repeated concussions (knockouts) can have an accumulative and deleterious effect on brain function in the long term. Thus, 9 knockouts in a 19-bout career can be reflective of ring competence, and such a boxer would need to be protected from himself.

However, it is hoped that in future, the boxers selected to fight by promoters, who are anxious to please the authorities and the crowd, are not subject to potentially humiliating 'downgrades' minutes before they are scheduled to appear in the ring. Communication must be the hallmark of future interaction between promoter and sanctioning body. Boxing needs promoters, but there must also be every effort to ensure that tragedies do not occur in the ring. Hopefully lessons were learnt in Mandeville.