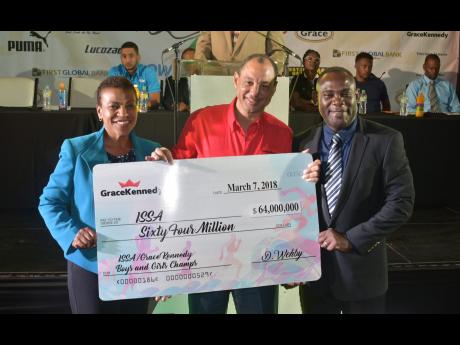 ISSA/GraceKennedy Boys and Girls' Athletics Championships (Champs) Committee chairperson Colleen Montague said that organisers would be looking to make the bleachers section of the National Stadium more attractive to spectators this year. This, she said, is an attempt to reduce the demand for grandstand tickets by patrons.

GraceKennedy announced a new seven-year sponsorship package for the event valued at more than $500 million.

Montague, who was speaking at the official launch of the championships yesterday, addressed the issue of more spectators seeking tickets for the grandstand in the stadium than it can accommodate.

"The bottom line is supply and demand, and we are unable to supply the demand for grandstand tickets," Montaque said. "We are encouraging persons to spread it out a little bit because we are trying to make the bleachers more attractive as it is with the grandstand. Activities through our sponsors will be in the bleachers, so it's a good vibe, but we understand people wanting the level of comfort that is in the grandstand that is not available in the bleachers."

ISSA president Dr Walton Small said that the body is now looking at ways to gain larger crowds on the first three days of Champs. This is because the event typically gets its largest attendances on the final two days.

"One of the things that we are looking at is a reorganisation of the schedule," Small said. "We believe that if we can start the 100m on the second day, then you realise that a lot of people would be coming in. But if you look at the logistics, because of the number of events we are offering, it is extremely difficult to reschedule the space that we have. To extend the championships for another day is going to make it even more difficult."

But Small said that this would be difficult to do because of what he said is the culture that exists around Champs at the moment.

"People look at Champs because they love the excitement of the last day with all finals," he said. "You interfere with that, and you are going to disrupt the culture that exists. However, for it to happen, we will have to introduce a tiered structure. We are looking to put together a team of experts from the media, coaches, management team, and principals to look at the schedule that exists now - how we can manipulate and shift to have it more resembling the Olympic model."

This year's ISSA/GraceKennedy Boys and Girls' Athletics Championships takes place at the National Stadium from March 20-24.