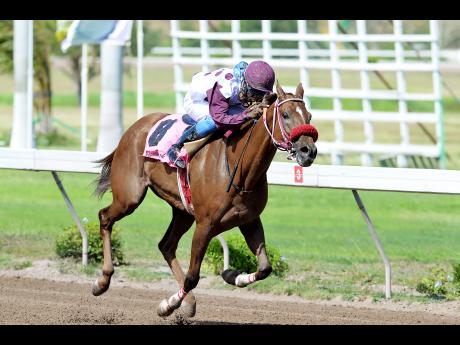 CRUCIAL APPEAL dug in determinedly under a hand ride from Dane Nelson to thwart a sustained challenge from A.P.I., landing yesterday's closing event by a head at 1000 metres straight.

Sent down in class among $850,000 optional claimers, the speedy eight-year-old gelding tracked A.P.I. and STANISLAUS before taking charge coming out of the five-straight chute, his favourite trip.

Panamanian jockey Dick Cardenas tried hard to rally A.P.I., but the four-year-old filly could not head off the ageing warrior, who stayed on strongly to clock 59.2 seconds for the distance.

Former two-time champion apprentice Doushane Gordon continued his comeback by booting home a fine double for trainer Fitznahum Williams - ADORING LADY at odds of 3-1 in the second event and 30-1 stunner STORM VALLEY in the fourth.

Gordon, sidelined for a few years with weight issues, made all aboard ADORING LADY at 1000 metres straight and returned to win the fourth astride STORM VALLEY, outbattling TEN CARATS with Wesley Henry at 1400 metres.