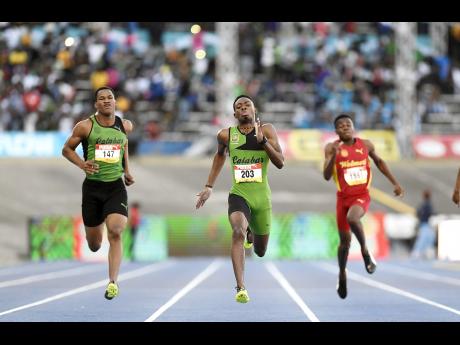 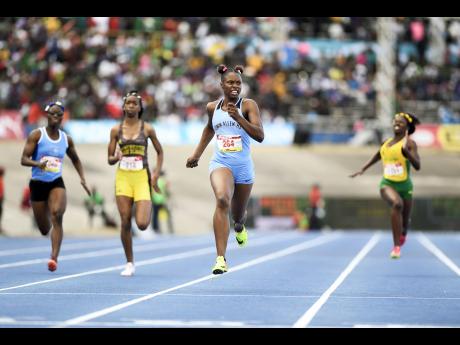 Gladstone Taylor
Kevona Davis of Edwin Allen wins the Class Two girls 200m finals with a record time of 22.72 at the ISSA/GraceKennedy Boys and Girls' Athletics Championships at The National Stadium.
1
2

It was a predictable but still exciting end to the ISSA/GraceKennedy Boys and Girls’ Athletics Championships at the National Stadium last night.

Calabar High School claimed their seventh straight hold on the Mortimer Geddes Trophy while Edwin Allen High made it five in a row and six in seven years on the girls’ side.

With questions being asked by the global athletics fraternity as to whether Jamaica’s sprint factory is going out of business, Calabar and Edwin Allen reminded everyone that there are two flourishing programmes at Red Hills Road in St Andrew and Frankfield in Clarendon.

Calabar, who promised that they would close on arch-rivals Kingston College’s (KC) 14-year winning streak, halved that total with no trouble as the victory looked very secure for The Lions from very early in the afternoon on the final day.

Calabar’s assistant coach, Omar Hawes, said that the school spent a lot of time assessing its weaknesses to assure it stayed on course with its plans for 15 straight titles.

“We changed the programme a bit and decided to spread the wealth among several athletes this year,” he said. “That paid dividends tonight. We had athletes who are well prepared and did their best today. The plan is to go back to the drawing board and fix errors we made this year. Eight should be great!”

Edwin Allen did not have their win as easily secured as Calabar, however, they still looked odds-on favourites as night fell on the National Stadium.

Head coach Michael Dyke praised his girls for the mettle they showed.

“Despite challenges, they remained very calm and showed me they are ready to take care of business. We have a young team, but I’m expecting us to be right here again next year,” he said.

There was no doubt in anyone’s mind that Edwin Allen’s Kevona Davis was the standout athlete over the five days of gruelling competition as she enjoyed the feat of shattering records on two occasions each in the 100 and 200m sprints. With the 100m record already in the bag on Friday night, Davis, who had previously told The Gleaner that she was unconcerned about lowering the 200m record she set on Thursday, seemed to have changed her mind. She won in a spectacular 22.72 seconds, just one-hundredth of a second off Simone Facey’s National Junior record, bettering Thursday’s time of 22.92.

Manchester High’s Kavia Francis took second in 23.58, and Julien Alfred of St Catherine, like she did in the 100m final, claimed bronze, this time with a clocking of 23.74 seconds.
Jamaica’s other brightest sprinting prospect, Calabar’s Christopher Taylor, and teammate Anthony Carpenter were head and shoulders ahead of the rest of the field as they grabbed a one-two finish in the Class One boys 200m final.

Taylor, chasing Usain Bolt’s Champs record of 20.25 seconds set in 2003, took off from his blocks and easily pulled away from the rest of the pack very early on as he crossed the line in 20.35, with teammate Anthony Carpenter, who had a slight limp in the final 40m of the race, getting across the line in second in 20.92.

The Calabar duo clocked their personal bests with those times. They were followed by Jamaica College’s Ryiem Robertson, third, in 21.12.

Calabar’s De’Jour Russell produced one of the more memorable performances on the day when he shattered his 110m hurdles record of 13.21 seconds he set last year, winning in 13.10 ahead of teammate Orlando Bennett (13.30) and St Jago’s Rasheed Broadbell (13.43).
St Elizabeth Technical’s Jauvauney James bid farewell to Champs with a classy victory in the Class One 800m.

James bided his time, and with about 75m remaining in the race, smartly and comfortably overtook Jamaica College’s (JC) Ken Reyes to take the win in 1:50.07 minutes as Reyes clocked 1:50.28. Calabar’s Kimar Farquharson was third in 1:50.81.

In one of the evening’s showcases, Calabar’s 4x400m open team was in a league of its own as Taylor returned to anchor them to what they thought was a record 3:05.60 ahead of Petersfield, 3:10.64 and JC, 3:10.93 minutes. Unfortunately for them, though, the record was not to be as the team was disqualified for using Evaldo Whitehorne in four events, with ISSA allowing a maximum of three. It means that the school’s previous time of 3:06.76, set in 2015, remains.