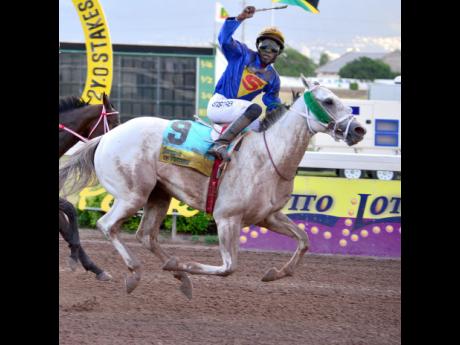 It's a weekend for bankers.  Saturday's Sunrise-6 should ensure a lot of holiday cash for a host of punters as there are no less than four bankers among the selections.
In the opening event over 1500 metres COMMANDER TWO  has very little to beat.  The bay gelding, by Forest Danger - Hurricane Michelle, has competed against the best three-year-olds in training and has won twice in seven starts. In his last outing Patrick Taylor's charge won easily in a fast 1:32.2  for the distance, beating the talented Fayrouz by four lengths. Last December COMMANDER TWO placed fourth in the Jamaica Two-year-old Stakes and Saturday's race is an easy warm-up for the upcoming Classics.
Trainer Wayne DaCosta's DRUMMER BOY and WITHOUT EXCEPTION had earlier looked set for big performances this season but both performed well below expectations in the recent Prince Consort Stakes and cannot be recommended.
The well forward newcomer BAD BOY TRUMP looks a cut above his rivals in Race Two. By Blue Pepsi Lodge - Turbinia, BAD BOY TRUMP has been been burning up the exercise track since early January. Last Saturday the Norris Phinn-owned and bred colt galloped 1100 metres in 1:07.2 and should give jockey Shane Ellis an armchair ride in the 1200 metres race.
LIKE A LADY, a five-year mare, and eight-year-old gelding EL CLIENTE,  are set to decide the outcome of the third race. Neive Graham's LIKE A LADY drops down from the lofty heights of the $850,000 claiming group to contest this $450,000 event. On paper she looks a winner but EL CLIENTE  has been in very good form since last October registering good times over various distances. He clocked 1:13.2 when winning over Saturday's trip last December 2  and with his fitness not in doubt he will be difficult to beat over one his better distances.
In two starts this year, PRINCESS KATRIEL has finished close-up in two non-winners of two races and is the firm choice for the fourth race, a quick sprint over  800 metres. In her first start  for 2018 she was caught close home, beaten a head over 1200m in a race won  in 1:13.3 by Jamaican Pharoah. Then on February 14 she lost by just under three lengths to Jamaica Citizen in an 1100m event race with the winner clocking 1:07.2. This is an easier race for the four-year-old filly. She is well drawn on the wide outside in the 12-horse field and should be well clear of  main rival LAWS OF THE CODE in the final 400 metres.
ast year's Classic contender, SOTOMAYOR, had his blowout run on March 17 after a near eight months absence from the track. That was over 1200m, a distance much too short for the 2017 Jamaica Derby runner-up. He gets the perfect distance on Saturday and will score a runaway win. Then take the fast EL NUMERO UNO to close out the Sunrise-6.