Man City can win EPL with derby win over Man U 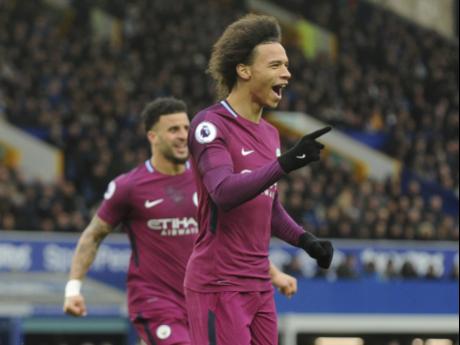 Now it's on for Manchester City to win the English Premier League in the earliest and sweetest way possible: victory over Manchester United in next Saturday's derby will seal the trophy for Pep Guardiola's runway leaders.

"I have lived in Manchester long enough to know what it means," City captain Vincent Kompany said after yesterday's 3-1 win at Everton. "It will be lively and spicy, but I don't mind."

Not even Alex Ferguson managed to clinch any of his 13 titles for United by beating the neighbours. Even more incredibly, City can secure their third title since 2012 with six games to spare thanks to the Manchester rivals both winning on Saturday.

Alexis Sanchez scored after setting up Romelu Lukaku's opener as United beat Swansea 2-0. City then cruised at Goodison Park, with Leroy Sane, Gabriel Jesus, and Raheem Sterling scoring inside the first 37 minutes and Everton settling for a second-half consolation from Yannick Bolasie.

"We are so, so close and so happy with the performance," said Guardiola, whose side is back on Merseyside in midweek to face Liverpool in the Champions League quarter finals.

United are already out of Europe. And the 20-time English champions' hopes of a first title since Ferguson retired in 2013 evaporated before the season reached its midway point. Holding on to second place will be a sign of progress, though, under JosÈ Mourinho.

Liverpool remained two points behind United - having played an additional game - after Mohamed Salah completed a comeback at Crystal Palace to win 2-1.

Tottenham, who have played two games fewer than Liverpool to trail by five points, travel to fifth-place Chelsea today as the London rivals tussle for the fourth Champions League spot.

It is unlikely that West Bromwich Albion will still be in the league next season, remaining 10 points from safety in last place after losing to Burnley 2-1. Next-from-last Stoke are at Arsenal today. Southampton, who occupy the remaining relegation place, lost to West Ham 3-0.