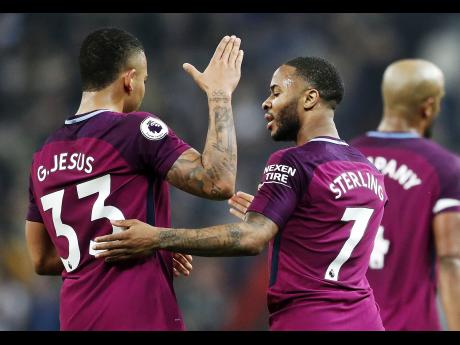 Manchester City recovered from a troubled period to put one hand on the English Premier League (EPL) title with a 3-1 win at Tottenham yesterday.

Over the last week, City were dumped out of the Champions League by Liverpool and missed the chance to seal top spot by losing to Manchester United.

But Pep Guardiola's side was back in fine form to see off fourth-place Tottenham. First-half goals from Gabriel Jesus and Ilkay Gundogan and a Raheem Sterling effort after the break did the damage.

City will clinch a third Premier League crown since 2012 if United fail to beat West Bromwich Albion today or lose to Bournemouth on Wednesday.

Regardless of United's results, City will be crowned champions by beating Swansea next Sunday.

Tottenham were in the game when Christian Eriksen scored to reduce the deficit to 2-1. But an impressive 14-game unbeaten run in the league going back to the reverse fixture at City in December is over.

There was no sign of City's recent troubles as the visitors immediately found their groove and could have led with only three minutes on the clock.

David Silva foraged down the right and fed Sterling, whose pinpoint cross was sent crashing into the post by a first-time Leroy Sane effort.