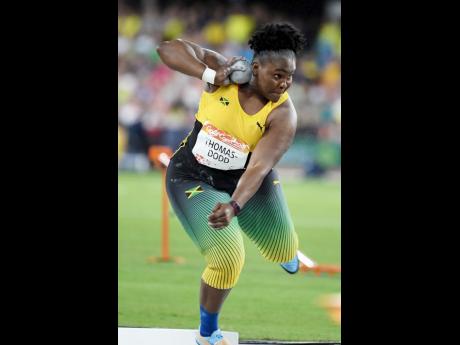 Jamaican Danniel Thomas-Dodd on her way to winning the women Shot Put title with a throw of 19.36m at the Commonwealth Games at the Carrara Stadium recently. 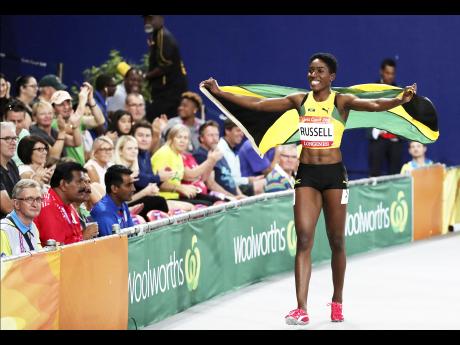 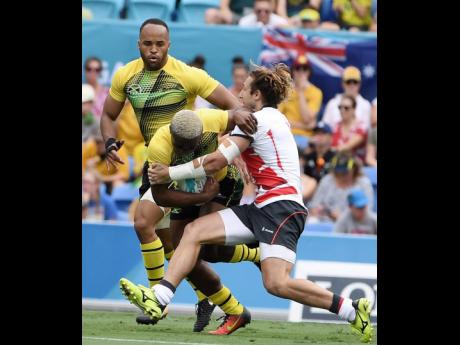 Collin Reid
Jamaica captain Marcus Webber is tackled by England's Daniel Bibby during the Rugby Sevens match played at the Robina Stadium on Saturday, April14, 2018 at the Commonwealth Games in Australia.
1
2
3

The XXI Commonwealth Games has ended, and most athletes and officials have returned to their respective territories; and in some cases moved on to other competitions. In Jamaica, like the rest of the Commonwealth, there are ongoing post-mortems, from the local governing body, government, and the average citizen.

One of the discussions centres on the importance of the Commonwealth Games Federation (CGF), its impact, and relevance in a post-Independence society like ours. On one side, there's the feeling that the CGF has lost touch with reality and only serves as a reminder that we are Her Majesty's subjects; while on the other hand, there are those, who believe the Games continues to provide a medium through which talent can be unearthed and developed.

It is obvious that, for us, the Games falls short of the Olympics and IAAF World Championships, but for many athletes this is their main international multi-disciplinary Games. The Games is important because firstly it helps with talent identification; giving us a chance to develop young and upcoming athletes, offering them a taste of top level international competition. This year, we had youngsters Lori Sharp in Triathlon, Mikel Facey in Rugby, Jodi-Ann Ward in Netball and De'Jour Russell in Athletics, all getting a chance to showcase their talent in their first major senior competition.

Additionally, many athletes in non-traditional sports in Jamaica got a chance to perform. The qualification process for Olympics is very rigid, and this allows us to showcase sports that would otherwise not have been given such opportunity on this stage. These include Boxing, Shooting, Lawn Bowls, Basketball and Wrestling. It is now up to the respective Member Associations to develop a strategy to build their respective sports in Jamaica so that we can continuously have this type of diverse representation at all levels.

Importantly, there are many economic opportunities. The inclusion of the Jamaica Commonwealth Manor is a very good one. The concept is not new as we have had Jamaica House at Olympics, but the execution this time around was different. It allowed for 'Brand Jamaica' to be displayed, including our rich history, products and services. From these Games, it is hoped that we would have created a medium through which business ideas could be shared and mutual agreements on trade and business opportunities developed.

Our dominance in Athletics continued. Gold Coast 2018 was crucial for Team Jamaica to once again show the world (including TV audiences) that we are still a force to be reckoned with. In fact, the 26 medals in athletics (including para) were important as we reminded the athletics world that we still had it in us following questions after the 2017 World Championships. I know one may point to the fact that there was no USA, China, or Germany, but the times and distances produced were still very good compared to the last major athletics championship. Additionally, several personal bests and national records were recorded led by Danielle Thomas-Dodd, who produced a NR 19.36m to beat Shot Put Goddess Dame Valerie Adams from New Zealand.

I have my issues with the foundation on which the Games itself is built, but generally support the notion that it is relevant. I do believe though that there needs to be some deep discussions about the future of the Games. While I believe that it has evolved like any other major international sporting event, that deep historical backdrop remains and was something with which I had to personally wrestle. Historically, most major events never included black people and even supported racism, classism and intolerance. The Commonwealth Games has changed from just something glorifying the "Empire" to something creating space for athletes, but there are still apprehensions and resentment towards the basic foundation on which the Games were formed.

Moving forward, the CGF must now have frank and open discussion about ensuring that all members of the Commonwealth have equal access and opportunity to said membership benefits, as well as have some discussion about the role of the Monarch as it relates to slavery reparations and the "rape of [our] paradise". This would go a far way in allowing many of us in the Caribbean to feel more comfortable participating in and supporting the Games.

- Dalton Myers is a Sports Consultant and administrator. Send feedback to daltonsmyers@gmail.com or twitter @daltonsmyers