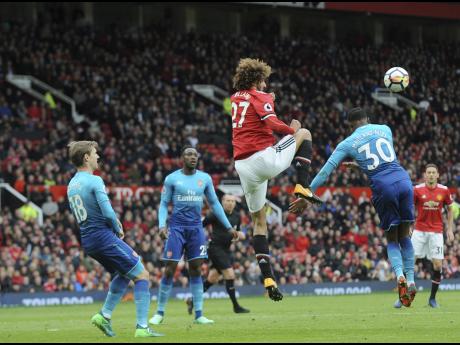 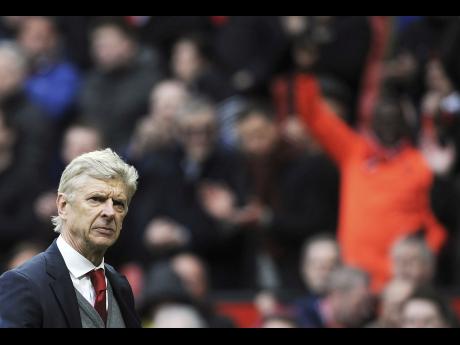 Arsene Wenger endured more agony at Old Trafford as his depleted Arsenal side conceded an injury-time goal by Marouane Fellaini to lose 2-1 to Manchester United in the English Premier League yesterday.

Fellaini headed in Ashley Young's inswinging cross in the first minute of added-on time to deny Wenger a point in his final trip to United's stadium before he leaves Arsenal after more than 21 years in charge.

This was nothing like the 8-2 loss in 2011 or the 6-1 defeat here in 2001, but it was painful nevertheless for Wenger on a day he was honoured with a glass vase before kick-off by former United manager Alex Ferguson and embraced by the current one, long-time foe Jose Mourinho.

Mourinho had the last laugh against Wenger, as he has so often, and the win moved United five points clear in second place, virtually guaranteeing second place behind champion Manchester City.

Henrikh Mkhitaryan marked his return to Old Trafford with an equalising goal as Arsenal - fielding a largely second-string team in view of the Europa League semi-final second leg on Thursday - responded well to conceding a 16th-minute goal from Paul Pogba.

Mkhitaryan never established himself in 18 months at United and was deemed surplus to requirements by Mourinho in January, setting up a move to Arsenal in a swap deal that saw Alexis Sanchez go the other way.

The Armenia midfielder barely celebrated when he scored in the 51st minute. Sanchez set up Pogba's goal by heading against the post.

This was once one of the must-see fixtures in English football, but the recent decline of Arsenal meant this edition lacked the bite and intensity of some of the past meetings of the two teams.

Even United fans' welcoming of Wenger they applauded him to and from the dugout said much about a game that meant little to Arsenal and felt like a pre-season match at times.