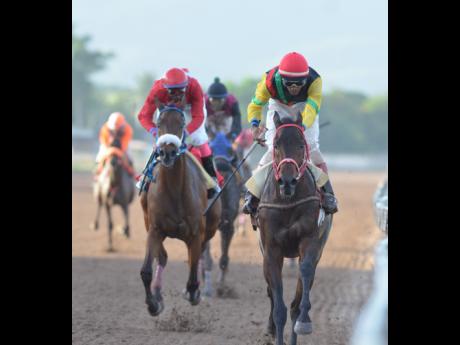 However, DaCosta won with RICKY RICARDO in the second event and Gary Richards-ridden UNCLE FRANK in the fifth, beating Nunes' 4-5 favourite, SOTOMAYOR, into third place at 1820 metres.

A 17-time champion, DaCosta fought off Nunes, his perennial rival, to win his 14th straight title last year, mainly through the exploits of Triple Crown, Superstakes, and Diamond Mile-winning filly SHE'S A MANEATER.

Nunes started the new season with a flyer, racing to the lead, prompting predictions of him snapping DaCosta's reign this season.

However, the champion trainer has rallied over the last month and even stuck his head in front last Saturday before FAYROUZ won the rich Oaks purse.

Meanwhile, champion apprentice Anthony Thomas seems intent on stealing a march on his seniors in the jockeys' title race, booting home a four-timer on the 10-race card.

Apprentice jockeys dominated the card with seven winners. Oneil Beckford, a three-kilo claimer, rode two winners, TWILIGHT ERUPTION at 8-1 in the seventh and 5-2 chance SUPERBOLT in the ninth.

Female apprentice Natalie Berger got in on the act by winning the eighth astride GUAVA GROUND.

Racing continues at Caymanas Park on Saturday with an 11-race card scheduled.