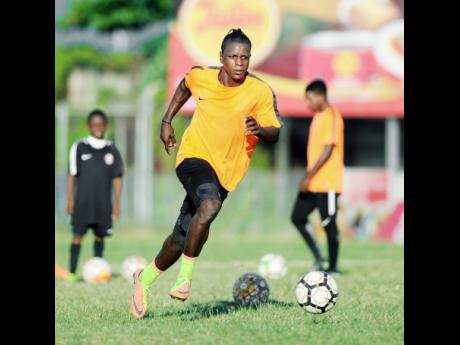 Having enjoyed his most successful start to his Major League Soccer (MLS) career, Jamaican striker Darren Mattocks has set his sights on scoring 20 goals in the competition for his new club, DC United.

Mattocks, who has been in excellent form in the competition, has scored five goals in 10 matches so far this season for the Washington-based club.

Mattocks' latest goals came on Saturday, when he netted the equaliser to earn DC United a 1-1 draw with Los Angeles FC.

His tally of goals leaves him three behind the competition's leading scorer, Gyasi Zardes from Columbus Crew.

The 27-year-old Mattocks told The Gleaner from his base in Washington that his aim is to become the leading marksman this season.

"I am still not satisfied with the tally, but I am okay with getting the goals," said Mattocks. "My hunger remains the same because, for me, it is a never-ending quest for perfection."

"At this point of the season last year, I hadn't scored any goals, but when you are in an environment where you are given the opportunity to be the number-one striker for a team - and I have been playing consistently - then the results are now showing what I knew I am always capable of doing," said Mattocks.

"My aim is to score 20-plus goals this season because if no injuries come along and I keep this form, then why not?" he said. "I think that if you are hoping to be the best, then you have to set the standard very high for yourself."

The talismanic striker endured a poor campaign with the Portland Timers, where he netted five goals in 43 appearances, before he was traded to DC United in the off season.

"I feel like now, I am finally fulfilling what I always knew I am capable of doing, because I am still motivated to be the best," Mattocks said. "I feel like I have a point to prove to myself to know that I can be the best in this league," he said.

The former Bridgeport High School star, who is playing in his sixth season in the MLS, stated that his hard work in the preseason is now paying off.

"Fitness-wise, it is the best I have ever felt in my career, because I spent my entire off season day in, day out in the gym, running the sands, and running the hills," Mattocks said. "I have a point to prove this season and so I came into this season extremely fit and I think now it is slowly starting to show," he said.