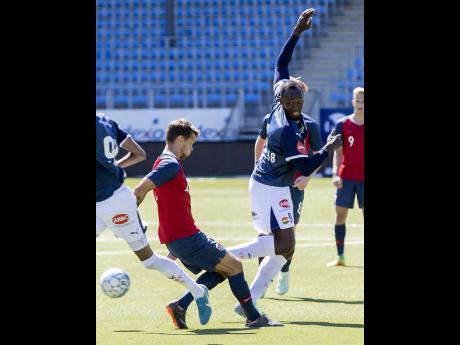 The final chord in the Nesta Carter retroactive drug test saga was struck last week. It all started when it was decided that substances which were undetectable under a former testing regime could be up for analysis up to 10 years after, as a result of the introduction of updated technology.

The Court of Arbitration for Sport ruled that there could be no return of the male sprint relay gold medal won by Jamaica when the team was disqualified several years after the 2008 Beijing Olympics. The entire team, including a reserve, Dwight Thomas, who ran in the preliminaries, was sanctioned. They were Michael Frater, Asafa Powell, Carter and the legend himself, Usain Bolt. Carter, who led off in the final, has expressed his disappointment with the outcome and Bolt has preferred to continue to savour the actual win experience. Meanwhile, news out of the Borussia Dortmund football camp is that the triple treble minus one legend has impressed in a workout encounter, scoring a header as well as a penalty kick in a shoot-out. The report ended with," Now it remains to be seen how his football career progresses."

All this is coming two months after the club's boss, Peter Stoger, after seeing Bolt in training, outlined what he needed to do to earn a professional deal. He commented to the Sunday Express, "I think he is talented but when he wants to play at a higher level, he clearly has a lot of work to do." He ended by saying, "The physique he needs for his other sport is clearly different from what he needs for football but it was really fun for us." For this columnist, this suggests that there is little hope for Bolt in his new role.

Knowing Bolt from his antics over time, however, it is not surprising that he would wish to continue to pursue his football dream. He has often shown a liking for Manchester United but if that, too, seems elusive, one cannot see him walking away from the glare of cameras only because the words from Dortmund are not encouraging.

However, Foster's Fairplay believes that he will weigh his options, and this is not to be taken to rule out a return to sprinting. This is what legends do, and the access to a world where he has been crowned on so many occasions might just be too tempting. At 32 years old and a possible three years in his favour, a lot depends on how he is received if and when he enters competitive football. That will be a lot more than just a training session, and the demands could prove more onerous than even he anticipated.

Having said all that, Foster's Fairplay is brave enough to undertake the impossible. This is to offer a prediction as to what the big man is expected to do. The view here is that he will prolong this football escapade and having come to a conclusion that it is too much for him to handle, will revert to that which he knows best.

He has to decide some time in 2019 as he will need to refocus to take on the Tokyo Olympics which is in the following year. All this might seem like wishful thinking, but it would have needed a brave individual to predict the stellar performances that came after 2002 when he first tickled the world with his class.

What must be realised in all this is that Usain Bolt is a special athlete, the likes of whom the world might never see again. This has to be respected as his future in the sport he has supposedly exited is contemplated.

The loss of a single gold medal is not going to change this as he is a true legend, and that, too, will not change.