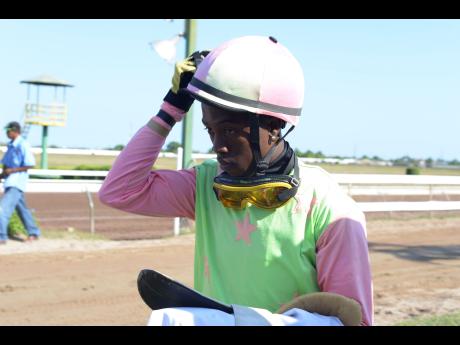 GUINEAS winner COMMANDER TWO will seek to answer DRUMMER BOY's Lotto Classic victory by taking on older horses in this afternoon's open allowance, a seven-furlong event, which will be keenly watched by rival connections with the Jamaica Derby three and a half weeks away.

Claiming he had nothing to prove by running the derby twice, trainer Patrick Taylor bypassed the Lotto Classic in which COMMANDER TWO would have topped the scale, allowing all his rivals weight at 10 furlongs.

Opting for the next-best thing, COMMANDER TWO's ability to stay the derby's 12 furlongs will remain as much a mystery following this afternoon's race, which has him carrying a modest 115lb at a friendly distance.

The handicaps are heavily against two of his main rivals, Wayne DaCosta's ARMAGEDDON and LOTTERY TICKET, at 56.5 and 56.0 kilos, respectively. The champion trainer's third horse, RADICAL, may be on a roll, hunting a fourth straight win, but is up in class and sitting level with COMMANDER TWO.

BIRDIE MY LOVE and BILINGUAL, both reporting off wins, are at the bottom of the scale but also up in class, a few pounds off COMMANDER TWO, the controlling speed, at a distance which won't give them a chance to take him out of his game plan.

Having kept his distance from carrying topweight in the Lotto Classic Governor's Cup, Taylor appears to be merely keeping COMMANDER TWO race-sharp, opting for seven furlongs, a blowout ahead of the June 30 derby.

On paper, Taylor should get his wish, a morale-boosting win at an easy distance three weeks before the big one. It is hard to go against COMMANDER TWO, who has twice clocked 1:32.3 for seven and a half furlongs, his best effort being March 31 when he set splits of 23.2, 45.2 and 1:10.2.

Taylor might have dodged the Lotto Classic bullet but COMMANDER TWO will have to put on an impressive display to make a convincing case that he will stay the derby distance, considering DRUMMER BOY, who, though failing to fire in the Guineas, was catching him with every stride at seven and a half furlongs in their previous meeting.