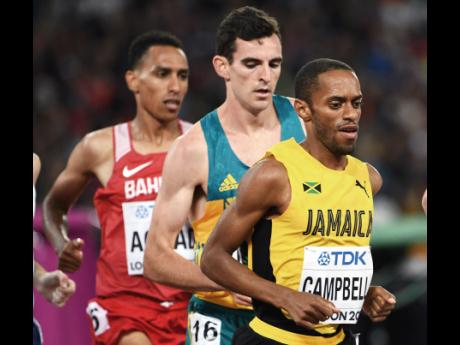 A good start to his endeavours in the 5000 metres has Kemoy Campbell smiling. Campbell, a 2017 IAAF World Championships finalist, made his seasonal debut in the 12 and a half lap race on June 9 with a solo run clocked in 13 minutes 35.09 seconds. The outcome has left Jamaica's distance king optimistic about the 2018 season.

Speaking just days after the pleasing effort at Bentley University, in Massachusetts, the 27-year-old national record holder was beaming.

"I think I can only get faster," he asserted, "because even in that race, I felt pretty smooth and relaxed the whole way, and at the end of the day, I'm very pleased with it."

He identified one source of pride regarding a run, where he lapped almost all of his rivals. "This is my first 5K of the entire season," he noted, "and I just went after it, running one of the best times I've ever run in any of my first 5Ks, and I did it all by myself."

"I think, for 2018, that just sets me up to do even better because now I know that I can run 13.35 feeling comfortable, I know if I push myself beyond that, I can run much faster," he projected, "but hopefully, the next 5K that I run it's going to be about pushing myself."

That next 5000-metre race will come at the Jamaican Championships in Kingston.

He has been training alone recently and said, "I've learnt so much, doing this by myself." He drives himself but is careful to modulate his workouts.

Campbell, who is resting to combat a bout of flu, reports that his early season injuries are behind him.

"I'm running pain free," he advised, "and now it's all up from here, hopefully, and I just have to keep on it, doing the exercises so I don't get injured again."