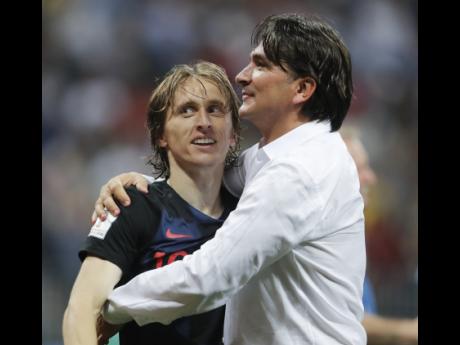 AP
Croatia head coach Zlatko Dalic (right) celebrates with Luka Modric after his team advanced to the final of the 2018 FIFA World Cup.

In a coaching journey across Croatia, Saudi Arabia and the United Arab Emirates, Zlatko Dalic's belief in his own abilities never dimmed.

"I used to say, 'Give me a Barcelona or a Real Madrid, and I will win titles,'" Dalic recalled Thursday.

Such jobs no longer seem so far out of reach, especially if Dalic collects the biggest prize in football tomorrow. Croatia will win the World Cup for the first time if Dalic's team can get the better of France and coach Didier Deschamps.

Receiving trophies is nothing new for Deschamps. As a player, the midfielder won titles at clubs in France, Italy and England, as well as the 1998 World Cup and 2000 European Championship with France. As a coach, he led France to the Euro 2016 final, losing to Portugal.

But the 51-year-old Dalic had a largely unremarkable playing career before switching to coaching in his native Croatia.

"In my life, I have always taken the harder path, had to fight for everything myself," Dalic said through a translator at Luzhniki Stadium. "I started at the bottom of the ladder."

The climb required a leap into the unknown with a move to the Middle East in 2010.

"I did not want to stay in Croatia and be a middling coach and to live off handouts," Dalic said. "I went abroad whenever it was possible to find a job."

Dalic eventually landed at Al-Hilal, where he won the Saudi Crown Prince Cup, and then reached the Asian Champions League final with Al-Ain.

"We cannot sneeze at that. These are major competitions," Dalic said. "This brought me huge experience ... and I built a name for myself. This was a hard path, but I believed in myself. When Croatia called, I never had any doubts."

The call that ended Dalic's nomadic seven-year journey came last year, when Croatia had a game remaining to salvage qualification.

"He is very dedicated to football," Croatian federation president Davor Suker said, "and we gave him the chance."

Dalic led Croatia into the World Cup play-offs, where they beat Ukraine over two matches. Now, he has taken his country further than ever before in a major competition, eclipsing Suker's semi-finalists in 1998.

Brand Dalic is growing after Croatia came from behind to beat England 2-1 in the semi-final in Moscow on Wednesday.