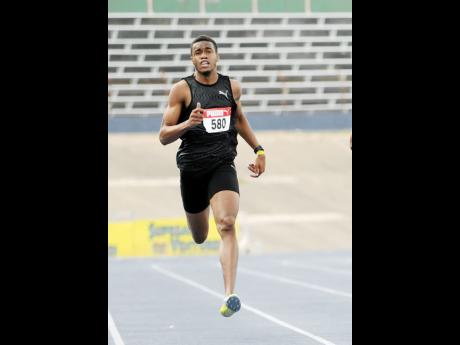 It was a successful Diamond League debut for Akeem Bloomfield, who while competing in Rabat, Morocco, showed no signs of inexperience, as he clocked a new meet record of 44.23 seconds to win in the Men's 400m event.

Bloomfield, in the process, erased the two year-old mark of 44.66 seconds set by Lashawn Merritt.

Using his good early speed, the lanky Jamaican went into an early lead and maintained his good form all the way for the win. Abdalleleh Haroun of Qatar was second in 44.68 seconds as Matthew Hudson Smith of Great Britain took third in 44.79 seconds.

Bloomfield was obviously excited after his success.

"The performance was fantastic and I am happy about it. I expected that the competition would be tough. The atmosphere was amazing and I am looking forward to the upcoming events. I hope to finish the year in a healthy shape," said Bloomfield speaking to the media after his win.

Bloomfield's training partner Nathon Allen, who was also slated for the event, pulled out at the last minute.

Competing in a non-Diamond League event, Tajay Gayle was successful in the men's long jump with a modest 8.09 metres, as the American duo of Marquis Denby, 8.05m and Jarrion Lawson 8.03m, ended second and third, respectively.

"It was not my best performance. I am not really satisfied but the crowd and the atmosphere were really exquisite," said Gayle after his win.

Goule clocked 1:58.33 in the Women's 800m, while Willians produced a distance of 14.47m in her event, which was won by the Colombian Caterine Ibarguen in a meet record and world leading 14.96m.